The blaze, driven by winds gusting up to 55 miles per hour, spread to a mobile-home park, where more structures were destroyed and injuries were reported, the Riverside County Fire Department said on its website. 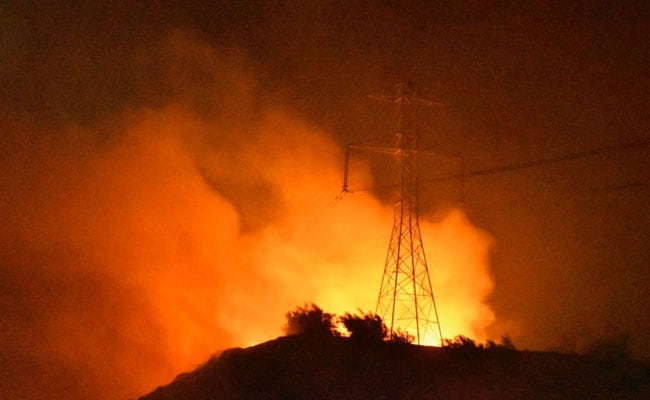 Mandatory evacuation orders were issues for residents near the mobile home park.

No further details were immediately available on how many mobile homes had been burned or the nature of the medical emergencies.

The Sandalwood Fire was one of about 275 wildfires that have broken out across California in the past 24 hours as hot, gusty winds signaled the start of its peak fire season, state officials said at a news conference.

Although many of the blazes were quickly contained by firefighters, the risk to life and property has prompted Pacific Gas and Electric Co cut power to about 600,000 customers, a move that California Governor Gavin Newsom blamed on years of mismanagement by the utility.

The Sandalwood Fire, which erupted shortly before 2 p.m. in the Riverside County community of Calimesa, about 70 miles (110 km) east of Los Angeles, quickly charred more than 500 acres and burned a single-family home to the ground.

The blaze, driven by winds gusting up to 55 miles per hour, spread to a mobile-home park, where more structures were destroyed and injuries were reported, the Riverside County Fire Department said on its website.

Much of northern California, from San Francisco to the Oregon border, remains under a state "red flag" fire alert.

Newsom faulted PG&E for putting what he called "greed" ahead of investments in its infrastructure to harden the electrical grid against dangerous winds.

PG&E filed for bankruptcy in January 2019, citing potential civil liabilities in excess of $30 billion from major wildfires linked to its transmission wires and other equipment.

As winds moved south, a similar cutoff was under way by Southern California Edison, which warned more than 173,000 customers they could lose power.