Who is Cherif Kouachi, Suspected in Charlie Hebdo Attack? 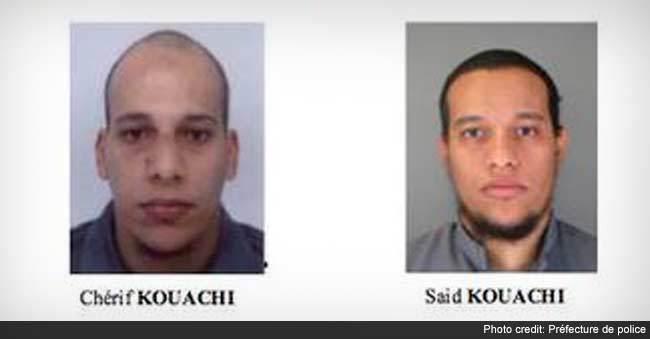 Cherif Kouachi and his brother Said are accused of carrying out the deadly attacks on the office of satirical magazine Charlie Hebdo.

Paris: He has a long history of jihadist ties and links to a key Islamic State militant, yet Charlie Hebdo suspect Cherif Kouachi still managed to slip under the radar of French intelligence.

The 32-year-old is accused along with his brother Said, 34, of carrying out the deadly attacks on the office of satirical magazine Charlie Hebdo on Wednesday that left 12 dead.

Born to Algerian parents and orphaned at a young age, the brothers grew up in eastern Paris not far from the site of Wednesday's attack.

Very little has been made public about Said or a third man thought to have been an accomplice, 18-year-old Mourad Hamyd who has been identified as Cherif's brother-in-law and has handed himself into police.

But Cherif's history with jihadist networks is well documented and dates back over a decade to his days as part of the "Butte-Chaumont network", named after a park in the 19th Arrondissement of Paris where its members lived.

This group of young, radical Muslims helped transport people to Iraq to join Al Qaeda's fight against US forces at the height of their intervention.

The younger Kouachi, sometimes going by the name Abu Issan, was only 22 when the network was broken up by French police. He was arrested just as he was about to fly to Syria in 2005, from which he was due to travel on to the fight in Iraq.

In an interview shortly after his arrest published by the Pittsburgh Tribune, his lawyer Vincent Ollivier said Kaouchi, then 22, was not particularly religious.

"He drank, smoked pot, slept with his girlfriend and delivered pizzas for a living," the newspaper reported.

At his trial in 2008, Kaouchi said he was inspired by the abuse of detainees by US troops at Baghdad's Abu Ghraib prison, but was relieved he did not have to go through with the trip.

He told the court he was working at a supermarket and his main interest was rap music, not jihad. An amateur video of his early MC skills- shot a year before his arrest- is now circulating on social media.

Despite his claims to being a reluctant fundamentalist, Kouachi was sentenced to three years in prison- half of it suspended- and his contact with radicals only grew.

Within months of getting out, he was embroiled in another plot, this time a failed prison break for Algerian Islamist Smain Ait Ali Belkacem in May 2010.

Belkacem was sentenced to life imprisonment in 2002 for a bombing at the Musee D'Orsay metro station in Paris in October 1995 that left around 30 injured.

Kouachi had reportedly grown close to another militant Djamel Beghal, who ended up serving 10 years for his role as "kingpin" in the break-out attempt. The charges against Kouachi were dropped.

Al Qaeda in Iraq gradually evolved into the Islamic State (IS) group, which broke ties with the parent group and gained worldwide infamy last year when it seized large swathes of Syria and Iraq and executed a number of Western hostages.

There are indications that Kouachi may have ties to IS, since he grew up with French-Tunisian Boubaker al-Hakim, who was also a key member of the Butte-Chaumount network.

Hakim was tried at the same time as Kouachi, receiving a seven-year sentence. He immediately returned to militancy after his release and claims responsibility for the high-profile assassination of two secular politicians, Chokri Belaid and Mohamed Brahmi, in Tunisia in 2013.

Hakim "represents the link between the Kouachi brothers and (IS)," said researcher Jean-Pierre Filiu, a leading expert on radical Islam at Paris's Sciences Po university.

No group has yet claimed responsibility for the Charlie Hebdo attack, "but it is certain that (IS) is closely following it and waiting to see how it ends," said Filiu.

"I am sure that the video claiming responsibility is already prepared."

On Thursday, IS radio praised the Charlie Hebdo killers as "heroes".

Promoted
Listen to the latest songs, only on JioSaavn.com
But despite all the attention on Kouachi over the years, experts say constant surveillance is not possible.

"At some point surveillance comes to an end, especially if you are smart enough to watch your step for a while. These are inevitable holes in the net," said Eric Denece, director of the French Centre for Intelligence Research.