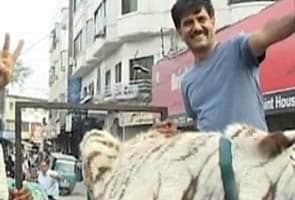 Islamabad: A white tiger being used by the PML-N in its election campaign in Pakistan, died on Wednesday because of prolonged exposure to heat, according to media reports.

The white tiger had been spotted at rallies addressed by Maryam Nawaz, the daughter of PML-N chief Nawaz Sharif.

The tiger was brought unconscious to the University of Veterinary and Animal Sciences in Lahore on Tuesday evening.

Veterinarians there tried to revive the animal but it died on Wednesday morning, the media reports said.

The PML-N has been using caged lions and tigers at many of its election rallies.

The tiger is the party's election symbol and Nawaz Sharif is himself sometimes referred to as "sher" (tiger).

The World Wide Fund for Nature described the use of the white tiger in the election campaign as a violation of international laws.

According to WWF, the endangered white tigers are extremely sensitive to heat and noise.

Over the past few days, temperatures in Punjab province have soared past 30 degrees Celsius.

WWF said actress and conservationist Faryal Gohar planned to petition the Lahore High Court against the illegal use of animals at election rallies.

Promoted
Listen to the latest songs, only on JioSaavn.com
WWF will support the petition.