Most of the bones of the two-legged spinosaurid were found by the late local collector Nick Chase, who dedicated his life to combing the beaches of the island on England's southern coast for dinosaur remains. 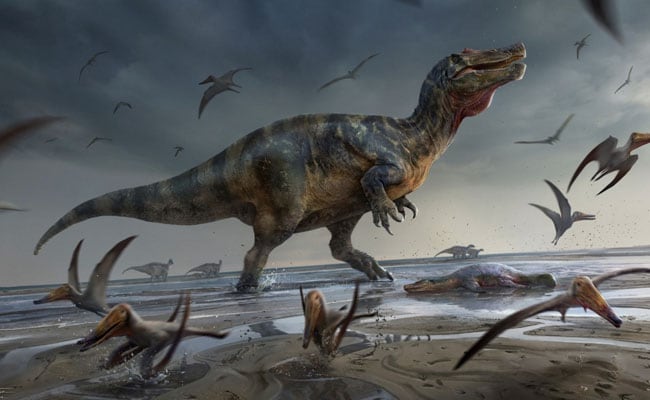 A researcher said the "numbers don't lie -- it is bigger than the biggest known specimen" in Europe.

A giant crocodile-faced dinosaur, discovered on the Isle of Wight by one of Britain's best fossil hunters, was probably the largest predator ever to stalk Europe, scientists said on Thursday.

Most of the bones of the two-legged spinosaurid were found by the late local collector Nick Chase, who dedicated his life to combing the beaches of the island on England's southern coast for dinosaur remains.

Researchers at the University of Southampton then used the few bones available to identify what they have called the "White Rock spinosaurid", they said in a study published in the journal PeerJ.

"This was a huge animal, exceeding 10 metres (33 feet) in length and judging from some of the dimensions, probably represents the largest predatory dinosaur ever found in Europe," said Chris Barker, a PhD student who led the study.

While admitting it would be better to have more bones, Barker told AFP the "numbers don't lie -- it is bigger than the biggest known specimen" previously found in Europe.

Thomas Richard Holtz, a vertebrate paleontologist from the University of Maryland not involved in study, agreed that the new find "does seem to be larger" than a huge predator whose fossilised remains were discovered in Portugal.

Matt Lamanna, a dinosaur palaeontologist at Carnegie Museum of Natural History in the US, praised the "excellent, thorough study of the specimen" given the lack of bones, but said it was difficult to compare sizes.

For example, he said the biggest known spinosaurid, the Spinosaurus, was likely the longest such dinosaur "but it probably wasn't as heavy" as the Tyrannosaurus rex or the Giganotosaurus -- "the latter of which is about to become super-famous thanks to the new 'Jurassic World' movie".

Why the long face?

The White Rock spinosaurid -- which the researchers hope to formally name as a new species -- is from the Early Cretaceous period and is estimated to be around 125 million years old.

Barker said that makes it the youngest spinosaurid found in Britain, two or three million years younger than the well-known Baryonyx.

Spinosaurids are known for their elongated heads. Rather than having the boxy skull of a Tyrannosaurus rex, their faces look more like that of a crocodile.

A leading theory to explain this trait is that they hunted in water as well as on land.

"They're kind of like storks and herons, wading in and snatching fish from the surface," Barker said.

The White Rock spinosaurid was discovered in a coastal lagoon environment where few dinosaur fossils are normally found.

"It helps start to paint a picture of what animals were living in the time, which is a very poorly known part of English palaeontological heritage," Barker added.

The team had already identified two new spinosaurid species on the Isle of Wight, including the Ceratosuchops inferodios -- dubbed the "hell heron".

The palaeontologists paid tribute to Chase, who always donated whatever bones he found to museums.

"Most of these amazing fossils were found by Nick Chase, one of Britain's most skilled dinosaur hunters, who sadly died just before the Covid epidemic," said study co-author Jeremy Lockwood, a PhD student at the University of Portsmouth.

Barker said Chase's "uncanny ability" to find bones showed that "it's not just professional palaeontologists who are making impacts in the discipline".

The discovery "highlights the fact that collectors have a big role to play in modern palaeontology and their generosity helps move science forwards", he added.

And if there any aspiring fossil hunters hoping to pick up where Chase left off, the palaeontologists would welcome more White Rock spinosaurid bones.

"We hope that a passerby might pick up some bits and donate them," Barker said.