"Where Are Your Manners?": British Politicians Outraged At Donald Trump 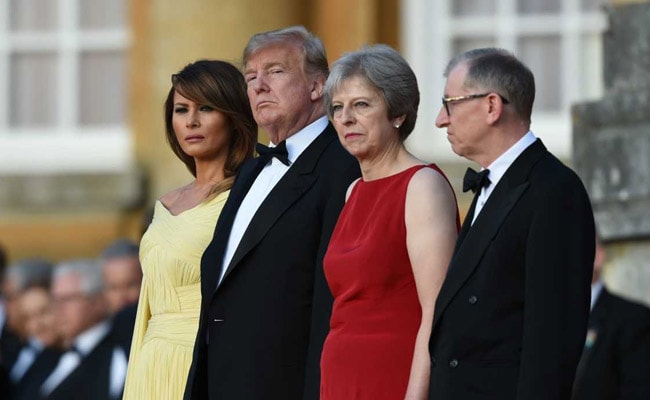 British politicians expressed outrage Friday at US President Donald Trump's attack on the government's Brexit strategy, although one leading eurosceptic said it was "perfectly reasonable".

Other MPs in May's Conservative party rounded on the president for being "determined to insult" Prime Minister Theresa May as she hosted him on a trip to Britain.

In an interview in The Sun tabloid published Friday, Trump said May's plans to keep close economic ties with the EU after Brexit would "kill" its hopes of a US trade deal.

He also suggested Boris Johnson, who quit as foreign secretary this week in protest at May's Brexit proposal, would make a good prime minister.

She attacked his "divisive, dog-whistle rhetoric" on migration, adding: "If signing up to the #Trump world view is the price of a deal, it's not worth paying."

While she noted May would probably keep silent, she said: "Many will be cheering if she tells @realDonaldTrump where he can stick his dog whistle".

Emily Thornberry, foreign affairs spokeswoman for the opposition Labour party who has herself called May's Brexit plan a "delusion", said Trump had been "extraordinarily rude".

"She is his host. What did his mother teach him? This is not the way you behave," she told ITV.

Stand up to him

"[Until] I remember her desperate rush to invite him, her repeated reluctance to criticise his Muslim ban or caging of children, her chasing him for a bad trade deal.... For God's sake Theresa, stand up to him today."

May must publicly respond to Trump's comments when the pair hold a press conference later on Friday.

Some Twitter users speculated that she could hit back, as Hugh Grant did playing the prime minister in romantic comedy "Love Actually".

She could say that "he and I do disagree on some things: his tearing of babies from their parents, his racist attacks on the London mayor, his lies, his admiration for dictators, and I tend to think his combover is an absurdity".

Trump is not the first US president to intervene on Brexit -- Barack Obama warned ahead of the 2016 referendum that if it left the EU, Britain would be at the "back of the queue" for a US deal.

Brexit supporters cried foul at the time, but eurosceptic MP Jacob Rees-Mogg said on Friday that Trump's comments were different because they did not come in the middle of a campaign.

He said his remarks on trade were a "perfectly reasonable thing for an American president to say".

(Except for the headline, this story has not been edited by NDTV staff and is published from a syndicated feed.)
Comments
Donald Trump in UKTrump on BrexitProtests against trump