Watch: This Savannah Cat Officially Named Tallest In The World

The title of tallest living domestic fenile went to a pet cat of the Savannah breed that stood 18.83 inches tall. 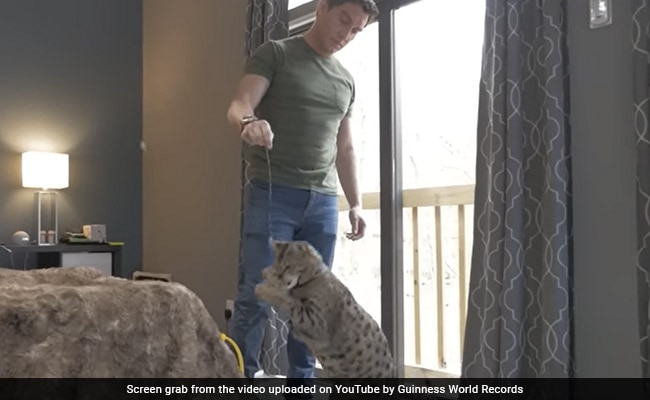 Fenrir the Savannah is officially the tallest living domestic cat in the world.

Savannah cats are a hybrid breed created when an African serval and a domestic cat are mated.

According to the Guinness World Records, "Fenrir, whose name derives from one of Saturn's moons, is an F2 Savannah cat, which is recognised by The International Cat Association as a domestic breed.His grandfather, a Serval named Kongo, was a tall wild cat and passed his height down to his offspring. A Savannah cat results from a cross between a domestic cat and a serval, a medium-sized, large-eared wild African cat."

"This unusual cross became popular among breeders at the end of the 1990s, and in 2001 TICA accepted it as a new registered breed."

Fenrir's sibling, Arcturus, was given the same honour when he was officially measured at 19.05 inches in 2016, but the feline was unfortunately killed in a house fire, according to Dr William. Arcturus is still recognised as the tallest domestic cat in history.

"For someone so obsessed with their cats to have not one, not two, but four Guinness World Records title holding animals in one lifetime is a bit surreal isn't it," Dr William told Guinness officials. "It almost feels like it was something destined to happen, and then even after our disaster, the universe tried to make at least that little bit of it right again."

Dr William believes that having Fenrir recognised for his achievement has helped him restore his life and hopes the feline's newfound fame will improve the world's understanding of hybrid cats.