The giant vessel had been wedged diagonally across Egypt's Suez Canal - one of the world's most vital waterways - since March 23. 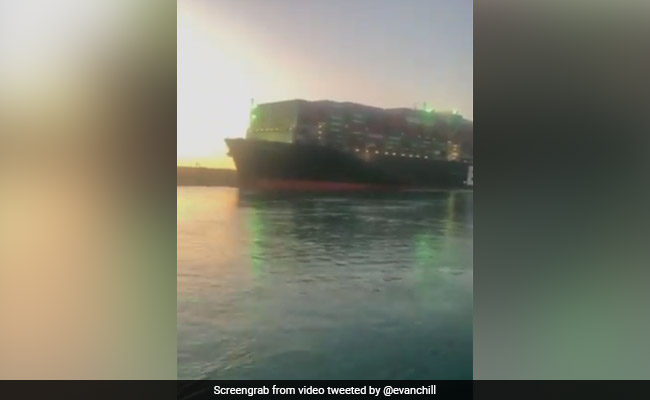 Almost a week after it ran aground in Suez Canal, blocking hundreds of ships, the giant cargo ship MV Ever Given started to move, videos that emerged on social media show. But its owner said that while the giant ship "has turned", it was still not yet afloat.

Ever Given was "stuck at an angle of 30 degrees towards the canal but that has eased," the spokesman for the vessel's owner said.

"A total of 11 tug boats have been pulling Ever Given since this morning," he added.

The massive container ship has been turned 80 per cent in the right direction, officials Egypt's Suez Canal Authority said, raising hopes the vital trade route could soon be clear.

"The position of the ship has been reorientated 80 percent in the right direction. The stern... moved to 102 metres (335 feet) from the shore," compared to its position four metres from the shore previously, Suez Canal Authority (SCA) chief Osama Rabie in a statement.

About 27,000 cubic meters of sand were dug out, to a depth of 18 meters, to free the ship, according to reports.

28th March 2021 in 90 seconds. Mashhour is the cutter suction dredger. You'll also see black tugboats close to the ship. And I've got my mates with their own diggers. We are much like power rangers now.

For six days, the giant vessel had been wedged diagonally across the Suez Canal - one of the world's most vital waterways - since March 23 leading to a long queue of more than 450 ships at the southern entrance to the trade route.

The backlog severely strained global supply chains already stretched by the pandemic as the canal is a conduit for about 12% of global trade. Some ships opted for the long and expensive trip around the southern tip of Africa instead of Suez.

Egypt - which controls the canal - had been reportedly losing around 14 million dollar per day in revenue because of the accidental blockade.

MV Ever Given cargo shipSuez Canal