In a viral video, captured by a drone, claims to show destruction of Russian ammunition in a forest area in Belgorod. 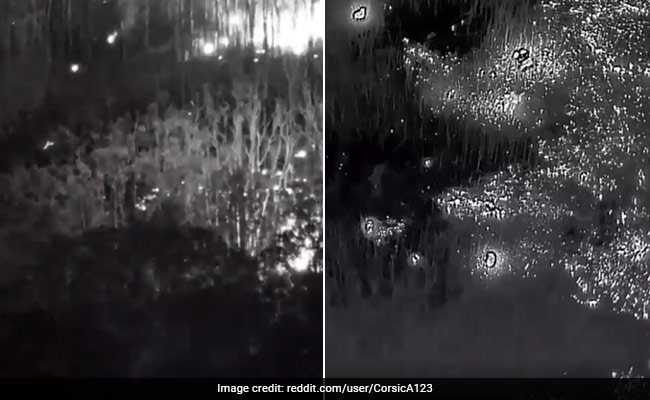 Image shows the massive blast in Russian ammunition in Belgorod, near Ukrainian border.

Ukrainian forces have been praised all across the world for their response to Russia invasion. Several videos have appeared on social media that show how Ukraine's military has successfully mounted a counter-attack against numerically superior Russia army. The latest video, captured by a drone, claims to show destruction of Russian ammunition in a forest area in Belgorod. According to the caption of footage, Russians tried to hide the ammo in the woods but "something went wrong" and it was destroyed.

Shared by a user named CorsicA123 on social media platform Reddit, the video recorded by a thermal camera shows a massive fireball as the ammunition is destroyed.

"Ruzzians tried to hide some ammo in the forest but something went wrong. Belgorod. Filmed by drone with thermal camera," the user wrote while sharing the post.

The post has received thousands of views and numerous comments within few hours of being shared.

According to the officials, the residents from two of the villages in Southern Russia near the Ukrainian border were evacuated on Thursday after a nearby ammunition storage depot caught fire, but no one was injured, reported Yahoo News.

Users in the post's comment section raised several concerns about the Ukrainian drone's entry into Russian territory, while others were seen sharing various information.

"So, Ukraine has drones over Russian territory? What happened to Russia's excellent air defences?" asked a user.

Another said, "They modified them to shoot at schools and apartment buildings, killing kids is more importand to ruzzians than protecting their own millitary instalations."

A third user said, "The US gave the Ukrainian Armed forces AGM-88 HARM missles on the down low before revealing they had. They've become a problem for Russian Air defense and the US made alot of them and are giving them over for use on their MIG-29's. Firing them alongside a barrage of HIMARS at the same time sounds like a bad time for those on the other end."

The governor of Belgorod region, Vyacheslav Gladkov, said in a statement that emergency services were investigating the cause of the fire near the settlements of Timonovo and Soloti, 15 kilometres (9 miles) from Ukraine. Meanwhile, Mr Gladkov didn't go into the specifics about the incident.