The video shows the koala crawling through the bushfires. The woman, who was passing through, saw the animal and rushed towards it 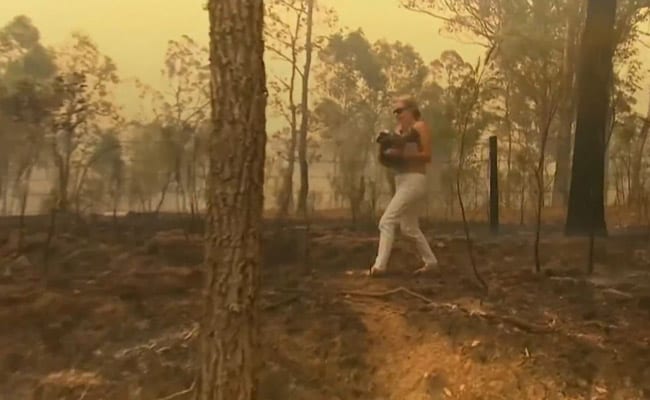 Toni Doherty has since been praised as hero.

As bushfires rage across southeastern Australia ravaging vast swathes of area, including the habitat of native wildlife, a heartwarming has video surfaced on the internet showing a woman rescuing a koala from the burning woods.

The viral video shows the koala crawling through the bushfires. The woman, identified as Toni Doherty, was passing through when she saw the animal and rushed towards it. She took the shirt off her back and wrapped it around the koala to put out the flames. The koala can be heard wailing as Toni poured some water over it. She then wrapped a blanked over it before taking the animal to a nearby hospital, according to local news network 9News.

Toni Doherty has since been praised as hero, both online and in the country which is currently struggling with unprecedented bushfires in its eastern state of New South Wales. More than 110 fires are still burning in New South Wales and Queensland. In South Australia more than 40 fires broke out during catastrophic fire conditions Wednesday.

Hundreds of koalas, native to Australia, are believed to have died in blazes that have destroyed their habitat since mid-October. Earlier this month, two of these endangered animals were rescued from a fire-ravaged area of the country's east coast.

Bushfires have wiped out about half the koalas living on a coastal reserve in New South Wales, experts estimated. Population estimates for koalas, native to Australia, vary widely, from as few as 50,000 to little more than 100,000.

They dwell mostly in eucalypt forests in eastern states and on the coastal fringes, usually living up to 20 years, carrying their young in a pouch and sleeping for up to 18 hours a day.

"Koalas are definitely in trouble in New South Wales, but if the declines continue at the same rate as the last 20 to 30 years, koalas could be extinct in the wild by mid-century," James Tremain of the Nature Conservation Council of New South Wales was quoted as saying by news agency Reuters.