The animal rights activist of the group Direct Action Everywhere was thwarted by Los Angeles Rams players during the "Monday Night Football" game. 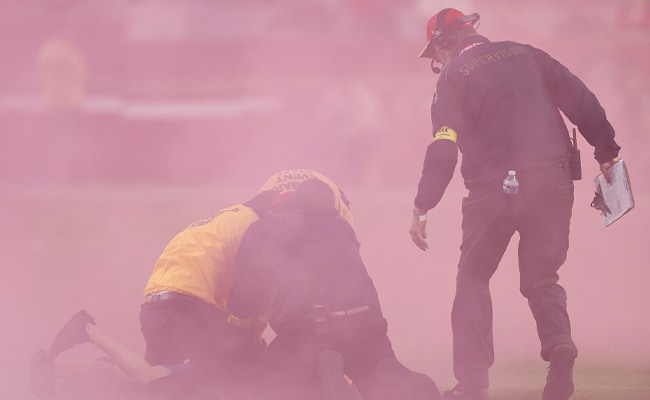 The intruder was apprehended by security and taken away.

A professional American football match between the Los Angeles Rams and San Francisco 49ers was interrupted on Sunday when a protestor carrying a pink smoke bomb got past security at Levi's Stadium and entered the ground.

The protestor has been identified as Alex Taylor, a member of the animal rights organisation, Direct Action Everywhere (DxE). He was wearing a T-shirt that said "RIGHTTORESCUE.COM".

According to the organization, this on-the-field protest was intended to attract attention to the legal case against two of its members who are accused of breaking into a Utah pig farm five years ago and stealing a couple of piglets. Wayne Hsiung and Paul Darwin Picklesimer, both campaigners for animal rights, are charged with burglary and theft. They risk receiving a 10-year prison term.

OMG BOBBY WAGNER JUST TRUCKED THE FAN THAT RAN ON THE FIELD pic.twitter.com/uwoEzkrFxc

According to a statement released by the group, "Paul Darwin Picklesimer and Wayne Hsiung rescued two sick piglets from Circle Four and documented dead and diseased piglets languishing in their mother's faeces and injured adult pigs physically unable to stand,".

BREAKING: Activist disrupts MNF game with pink smoke flare to elevate the #SmithfieldTrial and support the #RightToRescue. If the masses are not allowed to see the trial, we will bring the issue to the masses. Press release at https://t.co/lvGRZp6CeDpic.twitter.com/XBlGBtxYFV

Direct Action Everywhere said, "The case typifies a troubling pattern of repression via a justice system that has been weaponized by powerful political interests such as Smithfield, and is at odds with the public's interest in transparency and due process."

Last month, two DxE activists ran onto the field during the Bills-Rams game to stage a similar protest. They were wearing the same smoke flares and shirts.

"One of the women, Emek Echo, sustained severe head trauma when she was tackled, which she says left her dazed and unable to stand when security," the group said.