Tensions between the two countries remain high after the conflict over the breakaway regions of Abkhazia and South Ossetia. 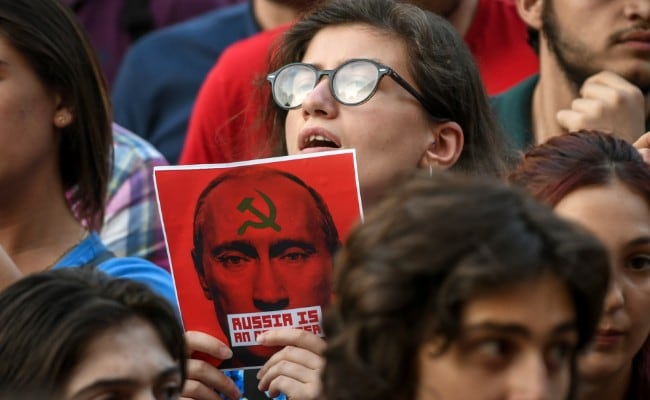 On Friday, the head of Georgia's parliament quit under pressure from demonstrators.

President Vladimir Putin signed a decree Friday banning Russian airlines from flying to Georgia, starting in July, after violent clashes in the neighbouring country over a Moscow lawmaker speaking in parliament in Tbilisi.

"From July 8, 2019, Russian airlines are temporarily banned from undertaking flights from the territory of the Russian Federation to the territory of Georgia," said the decree published on the Kremlin website.

In Tbilisi, protesters took to the streets for a second day Friday calling for snap parliamentary polls and the ruling party's oligarch leader to cede power following a police crackdown that left 240 people injured.

About 15,000 people gathered outside parliament to express anger over the behind-the-scenes rule of Georgia's richest man Bidzina Ivanishvili and his Georgian Dream party.

The demonstrations followed an uproar over a Russian lawmaker giving an address to parliament from the speaker's seat on Thursday -- a hugely controversial move in an ex-Soviet country that fought a war with Russia in 2008.

Tensions between the two countries remain high after the conflict over the breakaway regions of Abkhazia and South Ossetia.

Protesters brandished placards reading "Stop the USSR" and "Don't shoot at us -- we are your children".

The protests have morphed into a broader movement against the authorities, mainly Ivanishvili who is thought to control power in the Western-backed state.

According to the health ministry, at least 160 demonstrators and 80 police officers were injured Thursday when police fired rubber bullets and tear gas at the crowds. More than 300 people were arrested.

On Friday, the head of Georgia's parliament quit under pressure from demonstrators.

Another protester, Alexi Pataridze, accused Ivanishvili of being a pawn of Putin.

"He made his billions in Russia, he is controlled by Putin," said the 47-year-old dentist. "Georgians want to get rid of him."

The authorities said they would question prominent opposition leaders over their role in the protests.

The use of force in the pro-Western ex-Soviet country has sparked an international outcry, while the Kremlin condemned the protests as a "Russophobic provocation".

Famous for its vibrant cultural scene, distinctive culinary tradition, and picturesque nature, Georgia is one of the favourite destinations for Russian tourists, with over two million Russians visiting annually the tiny nation nestled between the Black Sea and the Caucasus mountains.

The United Opposition alliance has vowed to continue demonstrations until parliament is dissolved and snap elections are held.

Ahead of planned parliamentary polls next year, the opposition is hoping to capitalise on discontent with the ruling party over its failure to kick-start a stagnant economy.

About 10,000 protesters had gathered outside parliament on Thursday after Russian MP Sergei Gavrilov addressed a forum of lawmakers from predominantly Orthodox countries.

Police pushed back demonstrators when they attempted to enter the parliament courtyard, but the rally remained largely peaceful until midnight when officers launched a violent crackdown.

Georgian and foreign journalists were among those injured.

Amnesty International called for an "immediate, thorough and independent investigation into use of force by riot police."

Georgian President Salome Zurabishvili described Gavrilov's Russian-language address from the speaker's seat as "an offence against the country's dignity".

"But this can't justify anti-state actions, calls to storm parliament and overthrow the government," she said.

A 2003 "Rose Revolution" pushed out the country's Soviet-era leadership and brought in reformer Saakashvili, who served until 2013 and now lives in self-imposed exile as a Ukrainian citizen.

Relations between Georgia and its Soviet-era master Russia have long been fractured over Tbilisi's bid to join the European Union and NATO.

The confrontation culminated in a five-day war in August 2008 when the Russian army swept into Georgia -- bombing targets and occupying large swathes of territory -- after Tbilisi launched a military operation against South Ossetian separatist forces who had been shelling Georgian villages.

After the war -- which claimed the lives of hundreds of soldiers and civilians from both sides -- Moscow recognised South Ossetia and another separatist region, Abkhazia, as independent states where it then stationed permanent military bases.

Tbilisi and its Western allies have denounced the move as an "illegal military occupation."

(Except for the headline, this story has not been edited by NDTV staff and is published from a syndicated feed.)
Comments
Vladimir PutinGeorgia