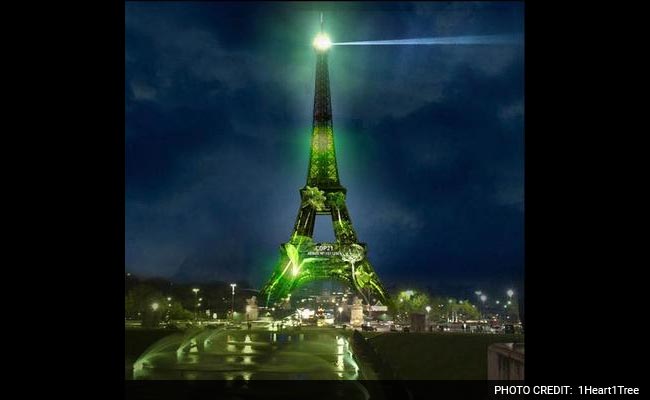 Monumental collaborative artwork creating virtual forests on the Eiffel Tower during the COP21 and real forests all over the world.

Paris: The Eiffel Tower turned green Sunday for the opening of the Paris climate conference, marking the launch of an art project that will see "virtual trees" grow on the landmark to support reforestation.

UN Secretary-General Ban Ki-moon and Oscar-winning French actress Marion Cotillard attended the launch of the week-long "1 Heart 1 Tree" project, which allows smartphone users to "plant a tree" on the tower.

"Everyone will be able to plant a virtual tree on the Eiffel Tower, which will grow to the beat of their heart, and then every virtual tree will be really planted in a reforestation programme," said Naziha Mestauoi, the digital artist behind the concept.

Users can download a smartphone application which records their heartbeat via a sensor and then projects this along with the image of a tree, their name and a short message onto the landmark, using lighting and mapping technologies.

Participants will be able to track the growth of their real-life trees, which will be planted in areas of Australia, Brasil, Senegal, India, France, Peru and Ivory Coast from 2016.

Each tree costs between three and 10 euros, depending on the species.

"The idea is to connect the virtual and the real, technology and nature, and give everyone the opportunity to act in a tangible sense," the artist said.

The launch came as some 150 world leaders gathered in Paris for a fortnight of talks starting today intended to clinch the first international pact to limit emissions of the greenhouse gases blamed for climate change.

The Eiffel Tower was closed for three days this month following the wave of terror attacks on Paris and was lit up in the French national colours blue, red and white when it reopened.