Despite literally tearing up the dance floor, the group of women emerged from the incident unscathed. 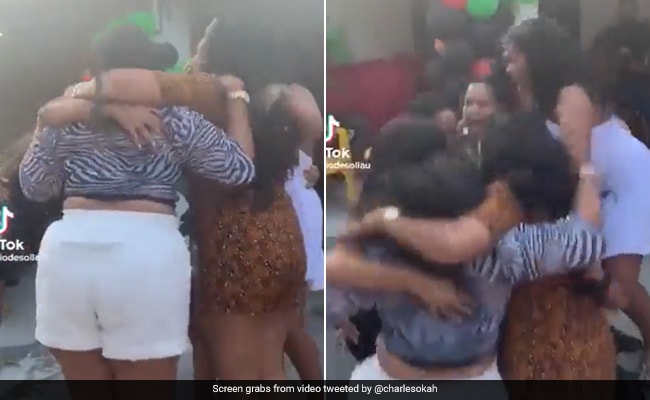 A shocking video showing a group of women falling into a sinkhole during their dance at a birthday party in Brazil is gaining traction on social media. The horrific accident occurred in the Brazilian city of Alagoinhas last month on September 24.

The video opened to show a group of women jumping up and down in a circle. Moments later, it showed a sinkhole appearing underneath them and swallowing them all up as witnesses screamed in shock.

Viewers discretion advised!
The seven dancers fell into a pit at a home in Alagoinhas, Brazil, on Saturday. The group was dancing during a birthday party celebration when the ground suddenly cracked and sent them falling into a hole.😳😳 pic.twitter.com/UIr6otAjil

"We were apparently dancing on the exact spot over the hole and we just fell right inside it," one of the victims, Epilator Gabriela Carvalho said, as per New York Post.

Ms Carvalho revealed that she and six other gyrating women fell into the sinkhole mid-move. But she also added despite literally tearing up the dance floor, the women emerged from the incident unscathed. The group of women found the situation peculiar as they threw shindigs in that spot without any untoward incidents before, Mr Carvalho said.

Now, as per the Post, workers are currently repairing the sinkhole.

Meanwhile, in a similar incident earlier this year, a house party turned nightmare for guests after a sinkhole opened under the swimming pool and sucked a man down a hole 43 feet deep. This incident took place in Israel.

A video showed the pool flor breaking and sinking inwards, sucking in most of the pool water in seconds. It also showed a man slipping towards the sinkhole, before quickly being pulled by other individuals.

One of the men, a 34-year-old male, managed to escape, but another man named Kimhi was later discovered dead. There were six individuals in the pool at the time, and the others were unharmed.

Sinkholes can arise in a variety of ways, but they often occur when the ground under the land surface dissolves into groundwater and is washed away, leaving an open cavern covered only by a thin layer of Earth. Sinkholes may also be caused by human action, with groundwater pumping and construction activities altering the natural ground structure and water drainage patterns.