Video: Thief Knocks Himself Out By Running Into Glass Door During Louis Vuitton Store Robbery In US

A man is seen on surveillance video knocking himself out while attempting to flee a store with luxury stolen goods. 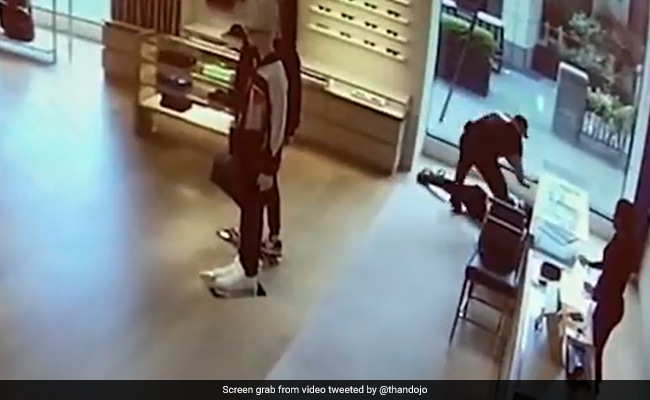 The brazen robbery happened in broad daylight at a Louis Vuitton store.

A man who was trying to run away with luxury stolen goods from a Louis Vuitton store in Washington was caught on camera running into a glass window. The incident took place in Bellevue. According to the police, the 17-year-old thief ripped handbags off the display worth $18,000 in broad daylight. But as he tried to run out of the store, the thief ran into a plate glass window, knocking himself out, KOMO News reported.

The thief mistook the clean glass window for an open space as he attempted to flee with stolen luxury goods, the outlet further said.

Prosecutors said the 17-year-old, whose name was not released because he is a juvenile, was part of a retail crime theft ring that has an extensive criminal history, the outlet reported.

Brazen teenage thief, 17, knocks himself out by running into glass door as he tries to flee Louis Vuitton store with $18,000 worth of handbags in the affluent #Seattle suburb of Bellevue,#Washington. pic.twitter.com/LB11pBCKQp

According to the New York Post, more than 50 repeat offenders have been arrested in Bellevue for retail robbery and shoplifting. So far this year, the county has charged 59 people in connection with organised retail theft.

Bellevue police have been combating the trend with their anti-crime initiative. New statistics show the city had 131 organised retail theft cases up to September 2021. Since the emphasis started, they had 63 cases during the same time frame this year. That's down 52 percent. Detectives have put in countless hours to combat crime as part of their anti-crime initiative.

"The message is, if you come to the City of Bellevue, and commit these crimes, we're going to put together solid cases," Captain Spingler was quoted as saying.