Vatican vows to fight gay marriage after gains in US, Europe 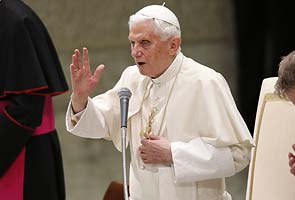 Vatican City: The Vatican, reacting to strong gains for gay marriage in the United States and Europe, on Saturday pledged never to stop fighting attempts to "erase" the privileged role of heterosexual marriage, which it called it "an achievement of civilisation".

"It is clear that in Western countries there is a widespread tendency to modify the classic vision of marriage between a man and woman, or rather to try to give it up, erasing its specific and privileged legal recognition compared to other forms of union," Father Federico Lombardi, said in a tough editorial on Vatican Radio.

Voters in the U.S. states of Maryland, Maine and Washington state approved same-sex marriage on Tuesday, marking the first time marriage rights have been extended to same-sex couples by popular vote.

Same-sex unions have been legalized in six states and the District of Columbia by lawmakers or courts.

Lombardi's editorial on Vatican Radio, which is broadcast around the world in some 30 languages, called the votes myopic, saying "the logic of it cannot have a far-sighted outlook for the common good".

Lombardi, who is also the Vatican's chief spokesman as well as director of Vatican Radio and Vatican Television, said there was "public acknowledgement" that "monogamous marriage between a man and woman is an achievement of civilisation".

WHY NOT POLYGAMY?
"If not, why not contemplate also freely chosen polygamy and, of course, not to discriminate, polyandry?" he said.
Polyandry is when a woman has more than one husband.

The Catholic Church teaches that homosexuality is not a sin but homosexual acts are. It says the rights of homosexuals should be guaranteed but that their unions should not be recognised as equal to heterosexuals and they should not be allowed to adopt children.

The constitutionality of restricting marriage to unions between a man and a woman is widely expected to be taken up by the U.S. Supreme Court soon.

The powerful U.S. Catholic Bishops conference, which is already at odds with the administration of President Barack Obama because its health care law obliges most employers to cover contraception, is expected to take a lead in trying to influence the court's decision.

Earlier this week, Spain's highest court upheld a gay marriage law, and in France the socialist government has unveiled a draft law that would allow gay marriage.

An editorial in Friday's edition of the Vatican newspaper, L'Osservatore Romano, said local Catholic Churches in many countries around the world were "the sentinels of religious freedom" for opposing gay marriage.

It called support for gay marriage "an ideology founded on political correctness which is invading every culture of the world".

"The Church is the only institution to say that, while persecuting homosexuals in undoubtedly unjust, opposing marriage between people of the same sex is a point of view that must be respected," the Vatican newspaper editorial said.