US says Iran got missile boost from North Korea 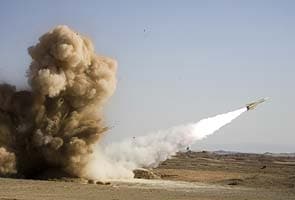 The suspected shipment -- mentioned among the flood of classified State Department memos obtained by WikiLeaks -- could also give Iran an important boost toward joining the powerful group of nations with intercontinental ballistic missiles, defense experts said on Monday.

The US suspicions carry still another jolt: reinforcing international fears about the possibility of closer nuclear cooperation in the future between Iran and North Korean engineers, who have already staged atomic tests.

US officials presented the claim in a meeting with top Russian security officials in late 2009 but did not offer conclusive evidence of the transfer of at least 19 so-called BM-25 missiles, according to the confidential February 24 memo posted by the WikiLeaks website, which specializes in disclosing confidential documents.

It also noted that "Russia does not think the BM-25 exists" and questioned why there have been no Iranian tests of the missile, believed to be based on a Russian design that could be fitted with nuclear warheads.

Still, the US-Russia meeting found ample common ground over concerns that North Korea appears to be actively engaged with Iran in exporting weapons systems and possible nuclear expertise. A UN report accusing North Korea of exporting banned nuclear and missile technology to Iran, Syria and Myanmar was sent to the Security Council earlier this month.

"This just confirms a lot of the rumors and reports about the capabilities of the North Koreans and gives more credence to those who support a defense shield against Iran," said Theodore Karasik, a regional security expert at the Institute for Near East and Gulf Military Analysis in Dubai.

Independent defense analysts say the possible acquisition of longer-range missiles fits into Iran's step-by-step claims of being able to reach farther from its borders. A year ago, Iran said it successfully test-fired an upgraded version of its Sajjil-2 missile with a reported range of 1,200 miles (2,000 kilometers), putting Israel, US bases in the Gulf and parts of southeastern Europe well within reach.

The range of the BM-25s parent design -- the submarine-launched Russian R-27 -- is about double: 2,400 miles (4,000 kilometers), the memo said. That covers Western Europe, Moscow and much of Central Asia.

Such a missile could give Iran the ability to carry much larger warheads and give technicians the ability to study and copy an advanced propulsion and guidance systems -- all key elements if Iran ever seeks to develop a nuclear arms program as some Western leaders fear. Iran, however, says it only seeks reactors for energy production and medical research.

It would not be the first time Iran has relied on North Korean missile technology. Iran's Shahab-3 missile, first displayed in 1998, is based on North Korea's Nodong-1 design.

But the American claims, if true, could mark the first delivery to Iran of a fully operational and state-of-the-art North Korean missile.

"(Iran) is working on improving their accuracy and not just their range. No one is challenging them and they aren't hiding this," said Ephraim Kam, an Israel-based expert on Iranian affairs. "And there is no doubt that North Korea has given them tremendous assistance in developing these missiles."

The American document did not offer details about the suspect sale or transport of the missile. But another memo describes how Chinese officials failed to intercept shipments of missile parts transiting from North Korea to Beijing, where they were put on Iran Air cargo flights to Tehran.

Besides simply boosting Iran's military muscle with more powerful missiles, the suspected BM-25s would give Iranian technicians a firsthand look at large missile designs and systems toward possibly developing long-range, or intercontinental ballistic missiles, with ranges of up to 3,400 miles (5,800 kilometers) and beyond.

Paul Rogers, an expert in defense affairs at the University of Bradford in Britain, said Iran could be seeking to move from its main arsenal of liquid-fueled missiles -- that would include the suspected BM-25s -- toward longer-range, solid-fueled rockets such as the current known top weapon, the Sajill-2.

The main advantages of solid-fuel missiles are mobility and the ability to fire quickly, he said. They are also more accurate. Liquid fuel takes time to load and cannot remain in the missile indefinitely. Such missiles also need to be near a fuel depot and cannot easily be moved.

"The issue here is whether they are trying to make the leap from liquid fuel to solid fuel," said Rogers.

In February, Iran unveiled a light, two-stage booster rocket it claimed could carry a satellite weighing 220 pounds (100 kilograms) up to 310 miles (500 kilometers).

It came a year after Iran claimed it launched a small satellite into orbit for 40 days -- part of an ambitious space program that has worried Western powers because they fear the same technology could also deliver warheads.

Meir Javedanfar, an Iranian-born political analyst now based in Israel, said the leaked memo on suspected North Korean missile sales could "strengthen the voice of those who want military action" against Iran.

"They could say that with such cooperation, sanctions and diplomacy are not going to work," he said.

Promoted
Listen to the latest songs, only on JioSaavn.com
Many other internal State Department exchanges among the WikiLeaks trove cite Gulf Arab allies and others expressing deep fears about Iran's nuclear ambitions and urging America to consider military strikes.

In Tehran, President Mahmoud Ahmadinejad dismissed the State Department documents as "without value" and claimed the leaks were an effort to sour relations between Iran and its neighbors.