The awkward handshake moment led to a barrage of comments from the users on social media. 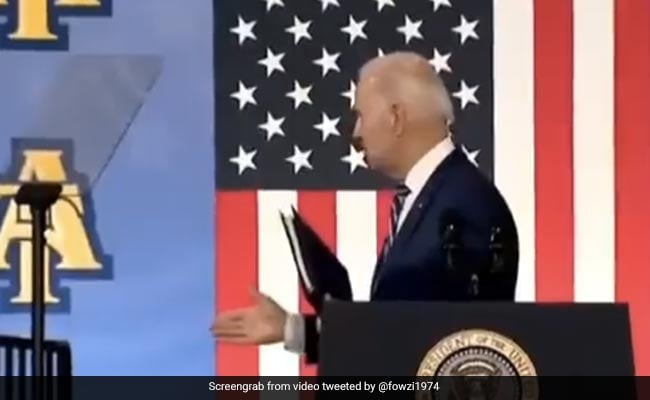 Joe Biden turned right after finishing speech but there was no one to shake his hand.

A video of US President Joe Biden appearing to turn to shake someone's hand after a speech has left the internet puzzled. There was no one on the stage beside him at North Carolina Agricultural and Technical State University in Greensboro where he delivered a 40-minute speech on Thursday.

As seen in the video, the 79-year-old Democrat leader finished the speech, then turned right with his hand stretched out in a handshake position. But there was no one on stage who could respond to the US President's gesture. No one from the applauding crowd approached the President to exchange the pleasantry.

#Biden shake hand with whom ‼️

Biden also looked lost on the stage and bizarrely turned his back to the audience as the speech ended.

The President's speech was about the supply chain crisis and also appeared to press Congress to increase funding for semiconductors production. But Biden also claimed that he had served as a 'full professor' at the University of Pennsylvania despite never teaching a class at the school, another gaffe which was quickly picked up by social media users.

The awkward handshake moment and his statement about being a professor led to a barrage of comments from the users on social media as well his opponents from the Republican camp who questioned Biden's cognitive abilities.

“Where are the White House and Biden family handlers whose job it is to make him look good?” Harmeet K Dhillon, former vice chairwoman of the California Republican Party, said in a comment on Twitter.

I repeat, where are the White House and Biden family handlers whose job it is to make him look good? This is truly bizarre, unless they WANT him to look like a dementia patient. https://t.co/AGtTnqtxPm

“This is truly bizarre unless they WANT him to look like a dementia patient,” she added.

Politician Robby Starbuck, who is running for Congress in Tennessee's upcoming Republican primary, remarked: “Oh man. The music makes it 10x worse. This man is unfit to be President. Period.”

A Twitter user commented: “No one believes you even the imaginary person whose hand you tried to shake.”

Several videos have surfaced in the past which show brain lapses by the US President in recent years.