Video shows a passenger in a car that did not immediately stop for police raised his hands, and a plainclothes officer broke the window with his forearm. 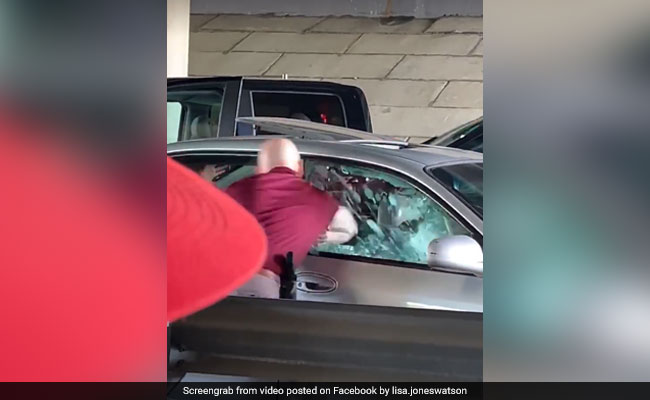 The man shields himself from the glass, then raises his hands again.

The St. Ann Police Department in Missouri is being scrutinized after video was posted online of one of the agency's officers aggressively apprehending a man during a traffic stop.

The video, captured by a passing motorist, shows the man sitting in the front passenger seat of a sedan with the window rolled up and his hands in the air for at least 10 seconds, Then, a St. Ann detective in plain clothes shoos a uniformed officer away and uses his forearm to hit the window three times, shattering it.

The man, who authorities have not identified, shields himself from the glass, then raises his hands again. The uniformed officer says something to the man, who responds "I can't."

The detective grabs the man's hands and the hood of his sweatshirt, then drags him through the widow and onto the ground, where the uniformed officer handcuffs him.

In the video, someone can be heard yelling, "Hey, that's abuse!"

Police in the St. Louis suburb did not respond to multiple requests for comment from The Washington Post. It's not clear in the video if the man who was apprehended had committed a crime, or if anyone associated with the traffic stop is facing any charges.

Authorities wrote in a Facebook post on the St. Ann Neighborhood Watch page that "at no point was there any abuse on the part of police regardless of what the person driving by, videotaping the incident and screaming that it was 'abuse' [said]."

"Unfortunately, this is a reminder that while St. Ann continues to be proactive it is our mission to treat people with the respect they deserve even if they are criminals," the post said.

Police said in that post and during an interview with St. Louis TV station Fox 2 Now that the incident began 16 miles away when authorities in St. Peters, Missouri, discovered there was a warrant associated with the sedan and attempted to pull it over. The car did not stop, police said.

St. Peters authorities did not pursue the vehicle, but did alert other municipalities. St. Ann police attempted to deploy road spikes to stop the sedan, Fox 2 Now reported. The sedan accelerated, swiped the side of a tractor trailer and drove away, police said.

"One of the passengers of the car refused to put his hands up, unlock the door, or open the window," authorities said in the statement on Facebook. "Because it was a dangerous situation, with numerous officers involved and people driving by, our officers had to protect themselves and the public by ensuring that no weapons were going to be used."

That's when the detective broke the window, police said. St. Ann Police Chief Aaron Jimenez told Fox 2 Now that the detective's window-busting maneuver is not part of department training, but said he commended the officer's improvisation.

A woman named Lisa Jones Watson posted the video to Facebook and said she watched the incident happen. She wrote that the passenger "tried to surrender peacefully."

"I know what we saw and it did not seem justified to me to drag him through broken glass the way they did. He was a passenger, not the driver," she said. "Look at the beginning of video, his hands were up and he was afraid. None of you would want this to happen to your child. I know I wouldn't."

The "suspect's car" was damaged during the incident, police said, though they did not indicate to whom the term "suspect" referred. No officers or civilians were injured, authorities said.

"As a police chief, I'm supporting our guys when they're right, and I thank the actual person who took the video because it clearly does not show our officers kicking or stomping them, abusing them, spitting on them in any way," Jimenez said. "We treated that suspect with the utmost respect."

(Except for the headline, this story has not been edited by NDTV staff and is published from a syndicated feed.)
Comments
St. Ann Police DepartmentOfficer Bashing Car WindowMissouri