US Pentagon Chief 'Shocked' By US Military Readiness, Warns On North Korea

US Pentagon chief Jim Mattis told lawmakers Monday he was "shocked" by the state of the US military's readiness, blaming legal budget caps and the grind of 16 years of constant war. 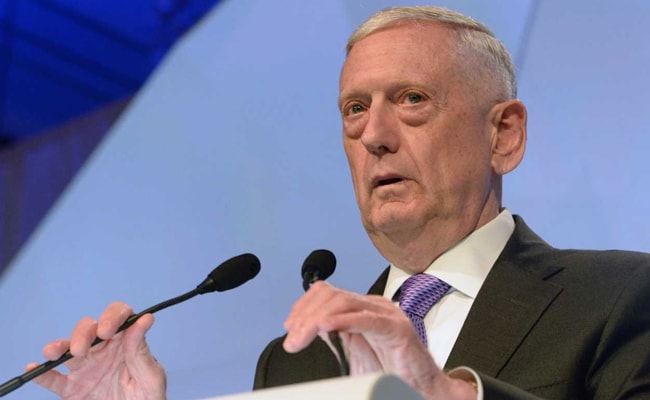 Jim Mattis, US Pentagon chief, blamed Obama-era budget caps for the poor state of the military.

Washington, United States: US Pentagon chief Jim Mattis told lawmakers Monday he was "shocked" by the state of the US military's readiness, blaming legal budget caps and the grind of 16 years of constant war.

The defense secretary also warned that North Korea has become the most urgent threat to peace and security, and said -- without giving details -- that America must do things differently in Afghanistan.

Pointing to Obama-era budget caps known as sequestration, Mattis said limits on military spending have left troops at greater risk and blocked important new programs -- even though the defense budget is already greater than that of the next seven countries combined.

"Four years later, I returned to the Department (of Defense), and I have been shocked by what I've seen about our readiness to fight... No enemy in the field has done more to harm the readiness of our military than sequestration."

He wants to slash State Department spending but give a significant boost to the Pentagon's vast budget, although it falls short of the historic spending bonanza sought by more hawkish Republicans.

The Pentagon has called for $574 billion in general defense funding, with an additional $65 billion for supplemental wartime spending -- for a total of $639 billion.

That represents a more than $50 billion increase -- about 10 percent -- over 2017 funding levels for the base budget, although it amounts to only about three percent over projections previously envisioned by the Obama administration.

Committee Chairman Congressman Mac Thornberry and other Republicans bemoaned the increase as insufficient.

"We have spent six years just getting by, asking more and more of those who serve, and putting off the choices that have to be made. We cannot keep piling missions on our service members without ensuring they have all they need to succeed," Thornberry said.

Although many Democrats on the committee agree, they worry where the money will come from, given the Trump administration's pressure to cut taxes.

Mattis pointed to the war in Afghanistan, which has dragged on since late 2001 with no end in sight, as exacting a heavy price.

Such campaigns have "exhausted our equipment faster than planned. Congress and the Department (of Defense) could not anticipate the accumulated wear and tear of years of continuous combat use," he said.

Lawmakers repeatedly asked Mattis for an update on Afghanistan, and about whether Trump will deploy thousands more troops to help Afghan partners reverse a stalemate against the resurgent Taliban.

"We've got to do things differently," Mattis acknowledged, noting only that any Afghanistan decision would come "soon."

Ahead of the four-hour hearing, Mattis also warned that North Korea poses the most urgent threat to international peace and security, calling the regime's weapons program a "clear and present danger" to all.

In written testimony, he said Pyongyang is increasing the pace and scope of its nuclear weapons program that leader Kim Jong-Un wants to be capable of delivering a bomb on the United States.

"The regime's provocative actions, manifestly illegal under international law, have not abated despite United Nations' censure and sanctions," Mattis said.

The defense secretary also warned of a return to "Great Power competition," where countries like Russia and China gain military assertiveness and place long-held global security protocol at risk.

"Both Russia and China object to key aspects of the international order so painstakingly built since the end of World War II," he said.

Pyongyang has test-fired a string of missiles this year, building on launches and nuclear tests that have ratcheted up tensions over its quest to develop weapons capable of hitting the United States -- something Trump has vowed "won't happen."

Promoted
Listen to the latest songs, only on JioSaavn.com
But Mattis and his top military officer, General Joe Dunford, said any military action against North Korea would have disastrous consequences for the peninsula.

"It would be a war like nothing we have seen since 1953," Mattis said about the end of the Korean War.
Comments
North Korea and USUS militaryJim Mattis