US Government Shutdown Highlights: The effect of the US government shutdown would be felt most from Monday when the federal government employees would not be able to join for their work and be forced to stay at home without pay. It is estimated that more than 800,000 federal employees would be furloughed. Only the essential services would be open. 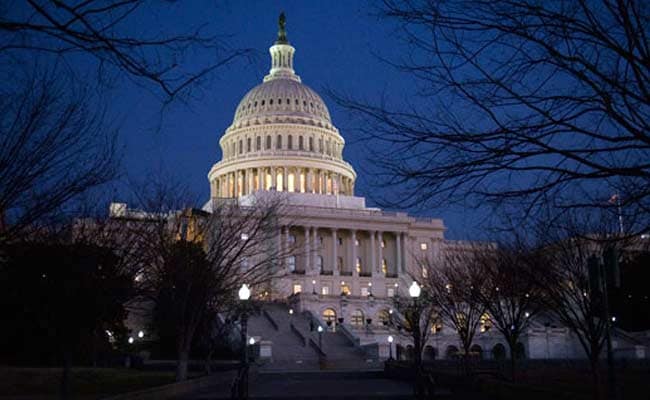 Washington: The US government officially shutdown today after the Senate rejected a short-term spending bill to keep the federal government running. The shutdown began at 12:01 am (local time) after a few Republicans joined Democrats in blocking the crucial measure would have provided short-term funding for the Pentagon and other federal agencies. Trump blamed the Democrats for the shutdown which comes exactly a year after he was sworn in as the 45th President of the United States. "Dems want a shutdown in order to help diminish the great success of the tax cuts, and what they are doing for our booming economy," he said. Despite last minute bipartisan meetings, the bill to fund the government until February 16 did not receive the required 60 votes. The Senate voted 50-48 to block the stopgap funding measure.

The short-term spending bill was passed by the House on Thursday. This is part of the Democrats strategy to force President Trump and the Republicans to negotiate with them on immigration reforms. The effect of the shutdown would be felt most from Monday when the federal government employees would not be able to join for their work and be forced to stay at home without pay. It is estimated that more than 800,000 federal employees would be furloughed. Only the essential services would be operational.

Here are the highlights of US government shutdown:

Jan 21, 2018 08:19 (IST)
Senate Majority Leader Mitch McConnell claims that earlier today, Democrats objected to the Senate voting to end the government shutdown.
Jan 21, 2018 07:03 (IST)
US Senate Republican leader Mitch McConnell sets key vote on funding for early Monday, news agency AFP reported. "I assure you we will have the vote at 1:00 am (local time) on Monday, unless there is a desire to have it sooner," he said.
Jan 21, 2018 04:02 (IST)
We are saying to (Senate Majority Leader) Mitch McConnell and President (Donald) Trump, "you are going to have to start dealing with the real issues facing this country": Bernie Sanders

We are saying to Mitch McConnell and President Trump: You are going to have to start dealing with the real issues facing this country. pic.twitter.com/JGEluWTOO4

Jan 21, 2018 03:53 (IST)
"Last night Senate Democrats made a decision not to join us in funding the government, in providing support to our military, and reauthorizing the Children's Health Insurance Program. They made the choice to shut the government down," the US Representative for Washington Cathy McMorris Rodgers said.

.@CathyMcMorris: Last night @SenateDems made a decision not to join us in funding the government, in providing support to our military, and reauthorizing the Children's Health Insurance Program. They made the choice to shut the government down. #SchumerShutdown. pic.twitter.com/BsFZtgzvAe

Jan 21, 2018 03:24 (IST)
"Senate Democrats shut down the government over a bill they have no issues with-a bill that keeps government open and extends health insurance to nearly 9 million children. They opposed a bill they don't even oppose. We do some crazy things in Washington, but this is madness," Speaker of the US House of Representatives Paul Ryan said.

Senate Democrats shut down the government over a bill they have no issues with-a bill that keeps government open and extends health insurance to nearly 9 million children. They opposed a bill they don't even oppose. We do some crazy things in Washington, but this is madness. pic.twitter.com/SW4YPzKTfc

Jan 21, 2018 03:11 (IST)
Attacking the Republican party, US Senator from Massachussets Elizabeth Warren said in a tweet, "The GOP controls every branch of govt. I repeat: They control the WH & Congress. They've lurched from crisis to crisis for months w/o funding disaster recovery, health centers or children's health care. All while Dreamers hang in the balance. This is no way to govern."
Jan 21, 2018 03:07 (IST)

For the first time in history, a one-party government was unable to keep the government going. That is pathetic. pic.twitter.com/hRlzNzQBxJ

Jan 21, 2018 03:07 (IST)
"I hope, based on last night's vote, that McConnell now changes his mind and begins to negotiate seriously. We must reopen the government as soon as possible," Sanders added.
Jan 21, 2018 02:58 (IST)
Independent US Senator from Vermont and former candidate for the Democratic presidential nomination Bernie Sanders said,  "I'm very disappointed that the Republicans chose to shut down the government. (Senate Majority) Leader (Mitch) McConnell insisted on going forward with a doomed vote rather than negotiating a serious agreement with the Democrats and Republicans who opposed him."
Jan 21, 2018 00:47 (IST)

Blame Game As Congress Struggles To End US Government Shutdown
With the US government in shutdown, the Senate convened a rare emergency session Saturday to negotiate a way out of a crisis that has marred the anniversary of Donald Trump's presidential inauguration.
Jan 20, 2018 23:27 (IST)
"The president (Donald Trump) will not negotiate on immigration reform until Democrats stop playing games and reopen the government," White House press secretary Sarah Sanders said.
Jan 20, 2018 22:08 (IST)
Taking a dig at the US President, Florida Congresswoman D Wasserman Schultz said it would be hard to figure out who is responsible for the shutdown, unless "someone involved said 'our country needs a good shutdown.' Then it would be pretty easy."

Donald Trump had, in May last year, tweeted saying the country needed a good "shutdown".
Jan 20, 2018 20:38 (IST)
"Democrats are holding our military hostage over their desire to have unchecked illegal immigration. Can't let that happen," says US President Donald Trump in his latest tweet.
Jan 20, 2018 19:39 (IST)
"It's disappointing to every American that Democrats in the Senate would shutdown the government when we have troops in harms way," vice President Mike Pence said
Jan 20, 2018 19:37 (IST)
"Before he took office, Donald Trump was happy to say the president owns the blame for a government shutdown. As President, he blames Democrats" Democrat leader Nancy Pelosi wrote in a tweet.
Jan 20, 2018 18:27 (IST)
After US Shutdown, Donald Trump Says Democrats Put Immigrants Ahead Of Military. Read here.
Jan 20, 2018 17:35 (IST)
Donald Trump says the US needs more Republicans in the Senate so that the government can be tougher on crime, border security and the military.

For those asking, the Republicans only have 51 votes in the Senate, and they need 60. That is why we need to win more Republicans in 2018 Election! We can then be even tougher on Crime (and Border), and even better to our Military & Veterans!

This is the One Year Anniversary of my Presidency and the Democrats wanted to give me a nice present. #DemocratShutdown

Jan 20, 2018 16:59 (IST)
Accusing the Democrats of  playing "shutdown politics", US President Donald Trump says they are more concerned with illegal immigrants than with the US' military or safety at their southern border.

Democrats are far more concerned with Illegal Immigrants than they are with our great Military or Safety at our dangerous Southern Border. They could have easily made a deal but decided to play Shutdown politics instead. #WeNeedMoreRepublicansIn18 in order to power through mess!

Jan 20, 2018 16:57 (IST)
While travel to the US may be impacted in the near future due to the US government shutdown, no flights between India and the US have been affected yet.
Jan 20, 2018 14:49 (IST)
Four Government Shutdowns Since 1990
There have been four government shutdowns since 1990. In the last one in 2013, more than 800,000 government workers were put on temporary leave. International ratings agency Fitch said a partial shutdown was unlikely to affect America's AAA/stable rating for US sovereign debt.
Jan 20, 2018 14:46 (IST)
Republicans Risk Being Blamed By Voters In 2018 Mid-Term Polls
With mid-term congressional elections looming later this year, Republicans risk being blamed by voters when the government stops functioning over lack of funds, reports AFP. A new Washington Post/ABC poll found that 48 percent of Americans blame Trump and the Republicans for a potential shutdown, and only 28 percent hold Democrats responsible.
Jan 20, 2018 13:43 (IST)

Donald Trump's Dealmaker Image Tarnished By US Government Shutdown
For President Donald Trump, this weekend was supposed to be a celebration. On the first anniversary of his presidency on Saturday, with the stock market roaring and his poll ratings finally rising, he had planned to rest at his Mar-a-Lago estate in Florida, feted by friends and admirers.
Jan 20, 2018 13:27 (IST)
GOP Fighting For Americans: Ronna McDaniel
Ronna McDaniel, Chair of the Republican National Committee, said: "Senate Democrats shutdown the govt over petty political games & blind opposition to GOP efforts to pay our troops & fund health care for 9 million children. GOP is fighting for Americans, Democrats are only fighting for Chuck & Nancy #SchumerShutdown"
Jan 20, 2018 13:09 (IST)
Democrat and lawmaker Ted Lieu attacks Donald Trump on shutdown.

The government should stay open and working for the American people. The last thing we need is a #TrumpShutdown. #DoYourJobpic.twitter.com/ZEvvnk1o5b

Jan 20, 2018 12:51 (IST)
Trying To Make Shutdown Less Impactful Than It Was In 2013: Office of Management of Budget
Earlier, the Office of Management of Budget said it was preparing for "what we're calling the Schumer Shutdown". The Director of Office of Management of Budget Mick Mulvaney told reporters that efforts were being made to have the government shutdown less impactful than it was in 2013. "We're going to manage the shutdown differently. We are not going to weaponize it. We're not going to try and hurt people, especially people having to work for this federal government. But we still need Congress to appropriate the funds," he said.
Jan 20, 2018 12:49 (IST)
#TrumpShutdown Becomes Top Trend On Twitter
"#TrumpShutdown" has become top twitter trend worldwide after the US government officially
shutdown today for the first time in five years after the Senate rejected a short-term spending bill to keep the federal government running.
Senator Chuck Schumer had tweeted: "This will be called the #TrumpShutdown. There is no one who deserves the blame for the position we find ourselves in more than President Trump."
Jan 20, 2018 12:43 (IST)
Republicans Abandoned Responsibility: Kirsten Gillibrand
Attacking Republicans, US Senator from New York Kirsten Gillibrand said, "Republicans control the White House, the Senate, and the House of Representatives. No matter how they spin this shutdown, we know what happened: They abandoned their responsibility."
She added, "Instead of protecting Dreamers, renewing health insurance for millions of children, and tackling the real problems hurting our families, the president and his enablers in Congress have manufactured a government shutdown."
Jan 20, 2018 12:39 (IST)
US Senator from Missourie Claire McCaskill has said that never before in the history of this nation has the government been shut down with one party in control of both Congress and the Presidency. Never.
Jan 20, 2018 12:33 (IST)
Berkeley professor and former US Secretary of Labor Robert Reich said, "If a shutdown meant billionaires and corporations wouldn't get their tax cuts, Trump and Republicans would be in overdrive. But when it comes to protecting immigrant children and providing 9 million kids with health care, they are less interested."
Jan 20, 2018 12:10 (IST)
White House Releases Statement on Shutdown.

Jan 20, 2018 12:09 (IST)
American People Will Suffer: Cory Booker
Cory Booker, US Senator from New Jersey, said, "The Republicans control the White House, Senate & House. With that power comes a basic responsibility to keep the government open. Tonight they failed, and now the American people will suffer."
Jan 20, 2018 12:02 (IST)
Democrat Leader Nancy Pelosi said, "I hope that we can now conduct bipartisan negotiations where we find our common ground to honor our responsibility to meet the needs of the American people."
Jan 20, 2018 11:55 (IST)
Brian Schatz, US Senator from Hawaii, said that Senator Nelson asked for unanimous consent to prevent a shutdown by buying us another 24 hours. It was objected to by Leader Mconnell. He also added, "Claire McCaskill asked for unanimous consent to move to a bill to make sure that our troops get paid no matter what. It was objected to as well."
Jan 20, 2018 11:43 (IST)
Speaker Paul Ryan said that "all of this is just unnecessary. It is reckless. Senate Democrats have brought us to a shutdown".