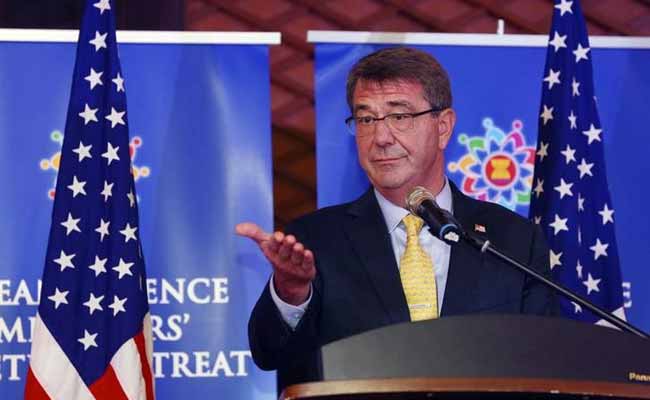 US Secretary of Defense Ash Carter flew to a US aircraft carrier transiting the disputed South China Sea. (Reuters)

Aboard the USS Theodore Roosevelt, South China Sea: US Secretary of Defense Ash Carter flew to a US aircraft carrier transiting the disputed South China Sea today and blamed China for rising tension in the region on a visit sure to infuriate Beijing.

Carter's visit to the USS Theodore Roosevelt with Malaysian Defense Minister Hishammuddin Hussein came just over a week after the USS Lassen, a guided-missile destroyer, challenged territorial limits around one of China's man-made islands in the Spratly archipelago with a so-called freedom-of-navigation patrol.

China claims most of the South China Sea, through which more than $5 trillion in global trade passes every year. Vietnam, Malaysia, Brunei, the Philippines and Taiwan have rival claims.

"Being here on the Theodore Roosevelt in the South China Sea is a symbol and signifies the stabilizing presence that the United States has had in this part of the world for decades," Carter told reporters as the carrier sailed about 150 to 200 nautical miles from the southern tip of the Spratlys and about 70 nautical miles north of Malaysia.

Asked about the significance of his visit at such a time, he said: "If it's being noted today in a special way, it's because of the tension in this part of the world, mostly arising from disputes over land features in the South China Sea, and most of the activity over the last year being perpetrated by China."

The warship was "conducting routine operations while transiting the South China Sea", Carter said on Wednesday after a meeting of defense ministers from Southeast Asia in Malaysia, a forum marred by the US-China disagreements over the sea lane.

Beijing has rebuked Washington over the patrol while China's navy commander has warned that a minor incident could spark war in the South China Sea if the United States did not stop its "provocative acts".

"China has consistently respected and safeguarded all countries' freedom of navigation and overflight enjoyed under international law," Chinese Foreign Ministry spokeswoman Hua Chunying said today when asked about the Carter carrier visit before it took place.

"What we oppose is waving the banner of freedom of navigation to push forward the militarization of the South China Sea and even provoke and endanger other countries' sovereignty and security interests. In this aspect, we hope the relevant actions and intentions of the US can be made open and above board."

The US Navy plans to conduct patrols within 12 nautical miles of artificial islands in the South China Sea about twice a quarter to remind China and other countries about US rights under international law, a US defense official said on Monday.

US defense officials have said Carter would not be on any warship carrying out such patrols.

"Teddy Roosevelt's presence there and our visit is a symbol of our commitment to our rebalance (to Asia) and the importance of the Asia-Pacific to the United States," Carter said on Wednesday.

In July, Admiral Scott Swift, commander of the US Pacific Fleet, was on board a Boeing P-8 surveillance plane as it carried out a seven-hour flight over the South China Sea.

Swift said his flight was routine, but it drew a rebuke from China. In May, Beijing called a US P-8 surveillance flight carrying a CNN team over the South China Sea "irresponsible and dangerous".

The 10-member Association of Southeast Asia Nations (ASEAN) scrapped a joint statement to be issued after their meeting on Wednesday because they were unable to agree on whether it should refer to the South China Sea dispute or not.

The United States had lobbied for inclusion of a reference, while China had argued it had no place in the statement. Carter and his Chinese counterpart attended the meeting.

US Deputy National Security Adviser Ben Rhodes said Washington believed that the US commitment to freedom of navigation was welcomed by ASEAN.

The United States says it takes no position on the South China Sea claims. China denies it's impeding freedom of navigation or overflight in the waterway.

Euan Graham, director of the International Security Program at the Lowy Institute for International Policy in Sydney, said the fact Hishammuddin was with Carter spoke to the Southeast Asian solidarity with Washington that the United States wanted to project.

"But in the actual demonstration of freedom of navigation, I think the reverse question currently applies: Is the US doing enough?" Graham asked.

"It's not so much the provocative statement of the photo opportunity of landing on the deck of the 'big stick' . If you dig into this carefully enough, you will find, I think, extreme caution in how the US is going about the freedom of navigation assertions."

Last week's patrol by the USS Lassen, which has since joined the Theodore Roosevelt carrier strike group, was the first such mission close to China's holdings in the Spratlys since 2012.