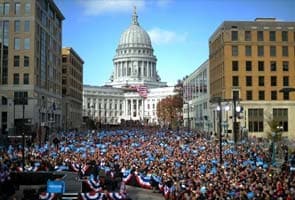 Democrats were projected to hold onto the Senate and Republicans were to retain the House of Representatives on Tuesday, raising the likely prospect of more partisan gridlock in a divided US Congress.

The Republicans suffered multiple blows to their quest to take back control of the Senate, failing to win several hoped-for seats, as the Democrats added three to their column.

"For every family that has been chipped at, squeezed and hammered, we're going to fight for a level playing field and put people back to work. You bet, that's what we're going to do," a triumphant Warren told cheering supporters.

While eyes were focused on the race for the White House, the battle for control of the nation's two chambers of Congress was vital to chances of making any headway toward easing Washington's bitterly split politics.

Experts were looking to see if the results could lead lawmakers away from the current stalemate but despite voter disgust with a "do-nothing Congress" in the past two years, there seemed little prospect of change.

Networks projected early on that Republicans would hold the House after Tuesday as was widely expected, as the Democrats had needed to win back an always improbable 25 seats to change the balance of power.

The Republican drive for the Senate took its first setback in Maine, where former governor Angus King, an independent who is expected to side with the Democrats, was projected to succeed retiring Republican Olympia Snowe.

Connecticut was particularly hard to take as Republican hopeful Linda McMahon spent big in her campaign but Democrat Christopher Murphy was forecast to win, picking up the seat of outgoing independent Senator Joe Lieberman.

Some 33 of the Senate's 100 seats were up for grabs, with 23 of those being defended by Democrats, giving Republicans a chance -- albeit slim -- of gaining four seats and seizing control of the chamber.

That effort unraveled further when Democrats were credited with holding onto Missouri.

In Indiana and Missouri, Republicans Richard Mourdock and Todd Akin became embroiled in pre-election scandals over ill-judged comments about rape and abortion.

Republicans swept back control of the House of Representatives in 2010 after a backlash to President Barack Obama's signature health care reforms.

They have since used their majority in the lower House and their ability to delay legislation in the Senate to thwart the White House incumbent's plans.

With a dangerous combination of expiring tax breaks and federal spending cuts looming, the US economy could plunge over its so-called "fiscal cliff" in January and Congress will take centre stage after Tuesday's votes are counted.

Republican Speaker John Boehner said retaining the House had showed US voters "made clear that there is no mandate for raising tax rates" but he pledged to work with all members in Congress to achieve a fiscal breakthrough.
All new legislation must be passed in identical form by both the Senate and the House before it is signed into law by the president, a fact Obama knows all too well, and which he has blamed for wrecking the second half of his term.

Much of the attention in the congressional election campaign had centred on Massachusetts, where Republican White House nominee Mitt Romney was governor between 2003 and 2007.

A recent surge for Warren saw the Harvard professor and liberal firebrand overcome a sluggish start to her campaign and deliver victory against Brown.

Another state being closely watched was Virginia, neighbouring the US capital, and Republicans were left hugely disappointed when George Allen failed to take the seat back and conceded victory to Democrat Tim Kaine.

The candidates had waged a vicious battle in recent months with the race centering on defence spending - Virginia is home to the Pentagon and major defence companies -- and abortion.

The fiscal cliff that will dominate discussions in Congress between now and Christmas is a major threat to the economy after a protracted but possibly reckless compromise was agreed last year between Democrats and Republicans.

If Congress doesn't agree on how to cut spending over the medium term, the current deal would force deep, immediate spending cuts on the government from January 1, while raising taxes.

The tax rises will crunch household spending, possibly tip the United States back into recession, and raise the spectre of another US credit rating downgrade from international ratings agencies such as Standard & Poor's.

If no new plan emerges, the existing agreement could cut up to four per cent from US gross domestic product, according to the International Monetary Fund.