Mattis said he would depart the administration Feb. 28 to provide time for a replacement to be identified and confirmed by the Senate. 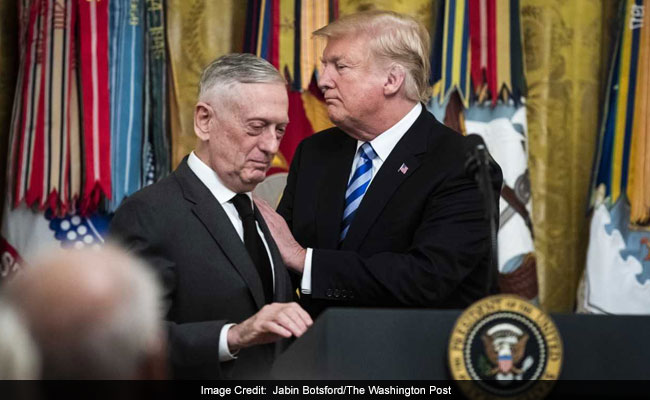 Donald Trump said that Secretary of Defense Jim Mattis would leave his position at the end of February.

Defense Secretary Jim Mattis resigned Thursday after a clash with President Donald Trump over the withdrawal of U.S. troops from Syria, saying in a parting letter that the president deserved someone atop the Pentagon who is "better aligned" with his views.

The retired Marine general's surprise resignation came a day after Trump overruled his advisers, including Mattis, and shocked American allies by announcing the pullout. In the process, Trump declared victory over the ISIS, even though the Pentagon and State Department for months have been saying the fight against the group in Syria is not over.

The discord caused Trump to lose a Cabinet official who won widespread praise at home and abroad but who experienced increasing differences with the commander in chief.

Long seen as a bulwark against Trump's isolationist and more extreme impulses, Mattis served as a calm "reassurer-in-chief" as the president sent out startling and provocative tweets. Mattis' departure adds new uncertainty about which course the administration might take on its global challenges.

Mattis pointed to some of his differences with Trump in a resignation letter he submitted to the White House on Thursday. The retired general emphasized that the United States derives its strength from its relationships with allies and should treat them with respect. He said the country must also be "clear-eyed" about threats, including from groups such as the ISIS.

"We must do everything possible to advance an international order that is most conducive to our security, prosperity and values, and we are strengthened in this effort by the solidarity of our alliances," Mattis wrote.

The defense secretary resigned during what one senior administration official described as a disagreement in the Oval Office on Thursday afternoon, in which Mattis sought to persuade the president to stand down on the Syria withdrawal but was rejected. Trump was later given a copy of the resignation letter and noted to aides that it was not positive toward him. By then, the president had shocked the Pentagon by filming a video on the White House lawn in which he claimed the ISIS had been defeated and said U.S. troops who had died in combat would be proud to see their fellow service members return home.

While the Syria announcement looked poised to score political points with the public, Mattis and other top advisers suspect that it will deliver a win to Russia, Iran and Syrian leader Bashar Assad, while risking a resurgence of the ISIS.

Mattis also has argued against drawing down troops from Afghanistan, which Trump is leaning toward executing in the coming months, according to administration officials. Senior administration officials said late Thursday that Trump had ordered the military to come up with a plan to remove thousands of troops from the country, after a 17-year war, starting as early as January. The United States has about 14,000 troops deployed to Afghanistan as part of a NATO mission.

The Pentagon released the resignation letter moments after Trump announced on Twitter that Mattis would be leaving, saying the already retired Marine would "retire." Trump made no mention of his differences in opinion with Mattis.

"General Jim Mattis will be retiring, with distinction, at the end of February, after having served my Administration as Secretary of Defense for the past two years," Trump wrote. "During Jim's tenure, tremendous progress has been made, especially with respect to the purchase of new fighting equipment. General Mattis was a great help to me in getting allies and other countries to pay their share of military obligations. A new Secretary of Defense will be named shortly. I greatly thank Jim for his service!"

During his nearly two years at the Pentagon, Mattis secured sizable increases in defense spending after years of budget caps and oversaw the development of a new strategy that orients the military toward competition with China and Russia and away from combating extremist insurgencies in the Middle East.

A staunch Russia hawk, Mattis bristled at the president's conciliatory gestures toward Russian President Vladimir Putin and moves to undermine NATO, according to people close to him. Russia and China "want to shape a world consistent with their authoritarian model," Mattis underscored in his resignation letter.

Moscow and Beijing were looking for "veto authority over other nations' economic, diplomatic and security decisions," he said, warning the president that the United States must "use all the tools of American power to provide for the common defense."

Lawmakers, ambassadors and policymakers for two years have looked to Mattis as a source of stability in a chaotic administration. His sudden resignation on Thursday sent jitters through a Washington establishment already coping with a meltdown in the financial markets and a possible government shutdown.

House Minority Leader Nancy Pelosi, D-Calif., said she was "shaken" by the resignation and described it as "very serious for our country."

Republicans were also dismayed by the decision.

Sen. Ben Sasse, R-Neb., said it was "a sad day for America because Secretary Mattis was giving advice the president needs to hear." Sasse said Mattis "rightly believes" that Russia and China are adversaries and described the isolationism that Trump sometimes promotes as a "weak strategy that will harm Americans and America's allies." Sasse added: "No, ISIS is not gone."

Known as the "Warrior Monk" from his days in uniform, Mattis developed a reputation as a cerebral thinker in the Marine Corps who liked to deliberate, read and study all possibilities before making important decisions.

That style clashed with the most freewheeling presidential administration in the postwar era, most notably this week, when Trump decided to withdraw from Syria without first running the move through a regular policy process that would consider the options and ramifications.

Mattis' frustrations grew with the arrival of national security adviser John Bolton, who curbed decision-making meetings and interagency policy discussions that the defense secretary valued, according to people familiar with the matter.

The final rupture between the defense secretary and the president came after weeks of tensions over Trump's broadsides against allies, his demands to withdraw from military entanglements in the Middle East and personnel decisions.

Mattis told one confidante last month that he wasn't going to leave because he had too many changes to make at the Defense Department, particularly on personnel.

But the defense secretary lost the most crucial battle on that front this month when the president disregarded his recommendation to make Air Force Chief of Staff Gen. David Goldfein the next chairman of the Joint Chiefs of Staff and instead chose Army Chief of Staff Gen. Mark Milley.

The person close to Mattis said that choice was particularly offensive to the defense secretary.

"It's the one major selection the secretary of defense usually gets," the person said, who like others spoke on the condition of anonymity to discuss the defense secretary's private views. "And the president totally overruled him."

It wasn't the first time. The president announced the creation of a Space Force as a separate branch of the military, even though Mattis had opposed the idea. Trump forced his defense secretary to scramble after announcing a ban on transgender individuals from serving in the military by tweet last year. Trump also foisted other initiatives on Mattis that the defense secretary didn't see as particularly important, from a deployment to the U.S. border with Mexico to a military parade that failed to materialize.

According to people in the White House, Trump didn't consider Mattis to be fully on board with some of his key initiatives.Mattis expressed skepticism over the prospects of nuclear disarmament negotiations with North Korea and bristled at the president's decision to suspend certain military exercises with South Korea as a goodwill gesture. Trump told advisers that he trusted Secretary of State Mike Pompeo, who has led the North Korea negotiations, more than he trusted Mattis.

From the start, Trump and Mattis displayed starkly different attitudes toward long-standing American alliances. Trump threw Starburst candies on the table in front of German Chancellor Angela Merkel and berated British Prime Minister Theresa May; Mattis flew around the world thanking such allies for their contributions to American security.

Several possible replacements for Mattis this week decried the president's decision to pull out of Syria, and the Senate may prove unwilling to confirm a replacement who would execute such a withdrawal. Retired Army Gen. Jack Keane called the move a "strategic mistake" on Twitter. Republican Sens. Lindsey Graham, R-S.C., and Tom Cotton, R-Ark., signed a letter demanding that Trump reconsider, warning that the withdrawal bolsters Iran and Russia.

With a career shaped by the wars following the 9/11 attacks, Mattis caught Trump's eye shortly after the presidential election in 2016. Revealing his choice for Pentagon chief, Trump hailed the retired general as "Mad Dog," a nickname Mattis earned - but detested - for his conduct in battle.

In the weeks leading up to Mattis' dismissal, Trump publicly called the defense secretary "sort of a Democrat" and began referring to him as "Moderate Dog."

Pentagon officials downplayed accounts of friction between Mattis and the White House as speculation grew that Mattis would join other national security leaders, including Secretary of State Rex Tillerson and Lt. Gen. H.R. McMaster, Trump's former national security adviser, who left their posts abruptly amid reports of distance from the president. Fellow retired Marine Gen. John Kelly, the White House chief of staff, is also leaving the administration, bringing an end to an era when Trump relied heavily on retired military brass.

But in recent months, media accounts described the secretary quietly challenging or setting aside requests from the White House, even from the president himself, further fueling speculation about a possible departure.

The departure of Mattis is likely to be greeted with mixed feelings among some in uniform, among whom he was generally revered as a straight-talking commander with deep knowledge of military affairs, though service members are prohibited from speaking negatively of Trump or other senior leaders.

Retired Sgt. Maj. Carlton Kent, Mattis's top enlisted Marine when the two were deployed in Iraq, said Thursday night that his phone has been "ringing off the hook" because service members and veterans wanted to talk about the departure.

"They were concerned that he was the right man for the right job, and now he's transitioning," Kent said. "They thought he was leading the department in the right direction. And it was combat-hardened warriors saying that, people who have witnessed him in combat."