United's new policies are similar to those used by Delta, which requires a veterinarian's note saying the animal is healthy and okay to be in public. 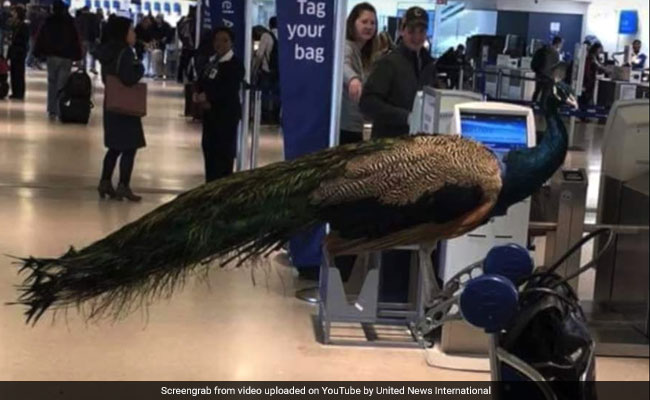 Airlines that have begun talking about tightening restrictions on a proliferating array of "emotional support" animals on commercial flights may have found their case bolstered this week after a picture of a peacock that was reportedly denied a seat aboard a United Airlines flight traveled far and wide.

The Jet Set, a travel-focused television show based in Washington, posted the photo on Facebook of the resplendent blue-and-green bird, saying that the "emotional-support peacock" had been denied boarding on a flight at Newark International Airport.

United Airlines confirmed that the exotic animal was barred from the plane Saturday because it "did not meet guidelines for a number of reasons, including its weight and size."

"We explained this to the customer on three separate occasions before they arrived at the airport," an airline spokeswoman said in a statement Tuesday to The Washington Post.

The peacock's owner, who was identified by the Associated Press as Ventiko, a photographer and performance artist in New York, told the news agency that she bought the bird its own ticket.

The peacock, named Dexter, appears to have its own Instagram account, showing the bird in one photo perched atop a luggage cart at the airport. "Spent 6 hours trying to get on my flight to LA (after following all required protocol)," the post read. "Tomorrow my human friends are going to drive me cross country!"

In response to Jet Set's Facebook post, many people criticized passengers' decisions to bring such animals on planes.

On Thursday, United announced that it would change its policies for emotional-support animals effective March 1, a shift it had been considering since late last year.

Federal guidelines specify that airlines must permit passengers with disabilities to board with trained service animals or emotional-support animals of many stripes, regardless of the animal's potential to "offend or annoy" others on the plane. But airlines have some latitude to deny boarding to certain "unusual" service animals, including snakes and other reptiles, ferrets, rodents and spiders, and can prevent them from boarding if the animal poses a threat to the safety of others.

United's new policy comes on the heels of dramatic increases in the number of passengers flying with comfort animals. About 76,000 flew last year, nearly double the 43,000 in 2016, United spokesman Charlie Hobart told USA Today. United's new rules are similar to those recently implemented by Delta Air Lines. Delta airline will now require notes from a veterinarian confirming that an animal is in good health and that it is properly trained for public settings, to avoid problems during the flight.

The change was hailed by the Association of Flight Attendants-CWA, the largest flight-attendant union. "The airline's increased requirements for emotional-support animals will reduce fraud and protect the legitimate need of animal assistance for passengers with disabilities and veterans," Sara Nelson, the group's international president told USA Today. "This is about maintaining safety, health and security for passengers and crew, while ensuring accessibility for those who need it."

American Airlines is reviewing its policies after the number of comfort animals on its flights increased by 15 percent last year, and the Department of Transportation is mulling new guidelines as well, according to USA Today.

The Washington Post reported this month that Delta, too, has seen large increases in the numbers of passengers with service or comfort animals in recent years. The Department of Transportation does not collect data on the number of service and support animals on flights, but disability-related complaints that it tracks related to service animals nearly quadrupled between 2012 and 2016.

Those statistics have added to the perception among airlines and some disability-rights advocates that some people use federal law to fraudulently bring pets into airplane cabins. Passengers traveling with animals for emotional support can be required to provide recent documentation from a mental-health professional for their pets, but the documents are easily forged or obtained from websites that provide questionnaire-style "exams."

Stories abound of scenes seemingly out of a parody movie: A diapered duck wandering around an airline aisle, or a flight attendant being asked to administer oxygen to a dog that its owner claimed was having an anxiety attack midflight.

Karin Brulliard contributed to this report, which has been updated.


(Except for the headline, this story has not been edited by NDTV staff and is published from a syndicated feed.)
Comments
United AirlinesPeacock barred by airlinesJetset