Barnaby Joyce, who was forced to quit in February will reportedly be paid Aus$150,00 for a tell-all television appearance by the pair on Sunday. 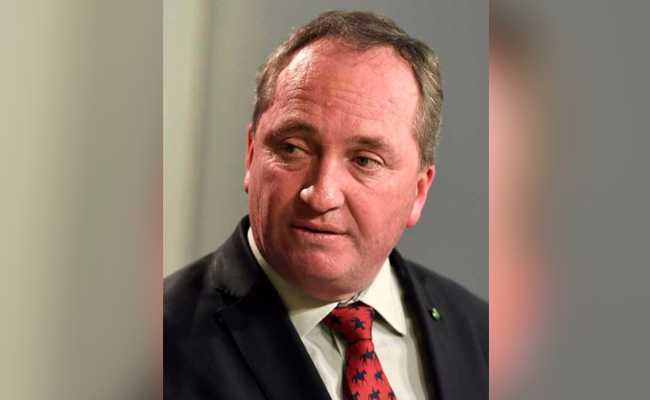 Barnaby Joyce questioned the paternity of the baby boy named Seb, since he has been born (File)

Sydney, Australia: A decision by Australia's former deputy prime minister to sell his story about having a love child with a former aide sparked derision Tuesday and calls for politicians to be banned from paid interviews.

Scandal-hit Barnaby Joyce, who was forced to quit in February and move to the backbench over his affair with his 33-year-old former media adviser, will reportedly be paid Aus$150,000 (US$113,000) for a tell-all television appearance by the pair on Sunday.

Malcolm Turnbull said he planned to raise the matter privately with the married Joyce, whose smaller National Party rules alongside the prime minister's Liberals.

"It's certainly not... a course of action that I would've encouraged him to take, I'll put it that way," he told broadcaster ABC.

"I think you can understand how I feel about it but I'll just be circumspect, uncharacteristically circumspect, on this and leave it for a private discussion."

News that Joyce, 50, had left his wife of 24 years for Vikki Campion gripped Australia earlier this year, sparking debate about workplace culture amid the global #MeToo movement against sexual harassment.

The saga took another twist when Joyce questioned the paternity of the baby boy, who has since been born.

Best known outside Australia for threatening to euthanise Hollywood star Johnny Depp's two dogs when they were brought into the country illegally, Joyce claimed Tuesday that it was Campion's decision to accept payment for the interview.

He said the couple had tried to ride out the attention, but the paparazzi would not leave them alone.

"Remember there are other people in this interview being Vikki and (baby son) Seb, so if it was just an interview with me as a politician, sure, I am not going to charge for that," he told The Australian newspaper.

"But that is not what they wanted, they wanted an interview obviously to get Vikki's side of the story.

"Like most mothers, she said: 'Seeing as I am being screwed over and there are drones and everything over my house in the last fortnight, paparazzi waiting for me, if everybody else is making money then (I am) going to make money out of it.'"

But the decision to accept payment has prompted accusations of hypocrisy -- Joyce had previously made a formal complaint to the Australian Press Council over the media's coverage of the affair.
Nationals minister Darren Chester said serving politicians should be banned from giving paid interviews.

"I think the public is asking the question, is it appropriate for sitting members of parliament to receive money to do media interviews. I think we should have the conversation in the parliament. I'm hoping for that conversation to occur," he said.

Liberals minister Kelly O'Dwyer warned it could backfire for Joyce.

"Ultimately, it's a matter for him and his judgement. I personally wouldn't do it, I don't think it's right, and I think most Australians are pretty disgusted by it," she said.

(This story has not been edited by NDTV staff and is auto-generated from a syndicated feed.)
Comments
Barnaby JoyceVikki CampionBarnaby Joyce and Vikki champions son Seb