Police in Charlotte charged UNC Charlotte student Trystan Andrew Terrell, 22, with two counts of murder and four of attempted murder. He is due to make an initial court appearance on Thursday, jail records show. 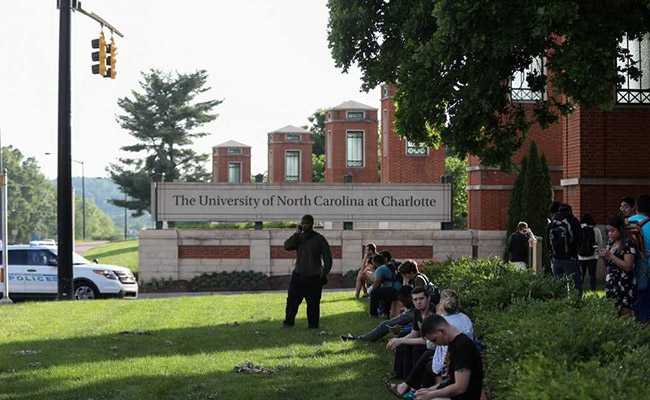 The shooting started in a classroom at about 5:40 pmon Tuesday, police said.

The University of North Carolina at Charlotte on Wednesday revealed the identities of the two people killed and four injured in a shooting that prompted an all-night lockdown lifted slightly before dawn.

The students killed in the Tuesday shooting were Ellis Parlier, 19, and Riley Howell, 21, the Charlotte-Mecklenberg Police Department said in a statement and university Chancellor Philip Dubois told WBT radio on Tuesday.

The wounded students were Drew Pescaro, 19; Sean DeHart, 20; Emily Houpt, 23; and Rami Alramadhan, 20. Dubois said all four were expected to recover, with one already released from the hospital.

Police in Charlotte charged UNC Charlotte student Trystan Andrew Terrell, 22, with two counts of murder and four of attempted murder. He is due to make an initial court appearance on Thursday, jail records show.

They offered no explanation for the suspect's motive.

Students on the campus spent a harrowing night as police searched door-to-door for any other suspects, not giving people the all-clear to move around until almost dawn on Wednesday.

"This is the saddest day in UNC Charlotte's history," the school's chancellor, Phil Dubois, said in a letter to the community posted on the school's website.

The shooting started in a classroom at about 5:40 pm on Tuesday, police said. Tristan Field, a student who witnessed the shooting, told CBS News as many as 50 students tried to escape through two doors.

"A chair fell in front of the door, so people were tripping over that, like, trying to climb over it," he said. "Some people fell down. It was like water through a funnel but wasn't fast enough."

A vigil was planned at the school for Wednesday, CBS News reported.

Sandy D'Elousa, a spokeswoman for the Charlotte-Mecklenburg Police Department, which is leading the investigation, said the gunman was believed to have acted alone.

"But I know the people in this community, and they will be here for each other," he said at a news conference.

According to its website, the University of North Carolina at Charlotte has more than 26,500 students.

The deadliest mass shooting on a US college campus took place at Virginia Tech University in Blacksburg, Virginia, in April 2007, when a student killed 32 people and then himself.