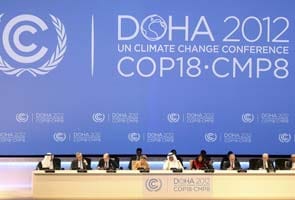 Doha, Qatar: U.N. talks on a new climate pact resumed on Monday in oil and gas-rich Qatar, where negotiators from nearly 200 countries will discuss fighting global warming and helping poor nations adapt to it.

The two-decade-old talks have not fulfilled their main purpose: reducing the greenhouse gas emissions that scientists say are warming the planet.

Attempts to create a new climate treaty failed in Copenhagen three years ago but countries agreed last year to try again, giving themselves a deadline of 2015 to adopt a new treaty.

A host of issues need to be resolved by then, including how to spread the burden of emissions cuts between rich and poor countries. That's unlikely to be decided in the two-week talks in the Qatari capital of Doha, where negotiators will focus on extending the Kyoto Protocol, an emissions deal for industrialized countries, and trying to raise billions of dollars to help developing countries adapt to a shifting climate.

"We all realize why we are here, why we keep coming back year and after year," said South Africa Foreign Minister Maite Nkoana-Mashabane, who led last year's talks in Durban, South Africa. "We owe it to our people, the global citizenry. We owe it to our children to give them a safer future than what they are currently facing."

The U.N. process is often criticized, even ridiculed, both by climate activists who say the talks are too slow, and by those who challenge the scientific near-consensus that the global temperature rise is at least partly caused by human activity, primarily the burning of fossil fuels like coal and oil.

The concentration of greenhouse gases such as carbon dioxide has jumped 20 per cent since 2000, according to a U.N. report released last week. The report also showed that there is a growig gap between what governments are doing to curb emissions and what needs to be done to protect the world from potentially dangerous levels of warming.

The goal of the U.N. talks is to keep the global temperature rise under 2 degrees C (3.6 F), compared to pre-industrial times.

But efforts taken so far to rein in emissions, reduce deforestation and promote clean technology are not getting the job done. A recent projection by the World Bank showed temperatures are expected to increase by up to 4 degrees C (7.2 F) by 2100.

"Climate change is no longer some distant threat for the future, but is with us today," said Greenpeace climate campaigner Martin Kaiser, who was also at the Doha talks. "At the end of a year that has seen the impacts of climate change devastate homes and families around the world, the need for action is obvious and urgent."

Dangerous warming effects could include flooding of coastal cities and island nations, disruptions to agriculture and drinking water, the spread of diseases and the extinction of species.

Many scientists also say that extreme weather events, such as Hurricane Sandy's onslaught on the U.S. East Coast, will become more frequent as the Earth warms, although it is impossible to attribute any individual event to climate change.

The Kyoto Protocol, adopted in 1997, is the most important climate agreement reached in the U.N. process so far. It expires this year, so negotiators in Doha will try to extend it as a stopgap measure until a wider deal can be reached.

The problem is that only the European Union and a handful of other countries - that together are behind less than 15 per cent of global emissions - are willing to put down emissions targets for a second commitment period of Kyoto.

The U.S. rejected Kyoto because it didn't impose any binding commitments on major developing countries such as India and China, which is now the world's No. 1 carbon emitter. The U.S. and other Western countries insist that the firewall in the climate talks between developing and developed countries must be removed so that the new treaty can apply to all nations.

China and other developing countries want to maintain a clear division, saying climate change is mainly a legacy of Western industrialization and that their own emissions must be allowed to grow as their economies expand, lifting millions of people out of poverty.

Promoted
Listen to the latest songs, only on JioSaavn.com
That discord scuttled attempts to forge a climate deal in Copenhagen in 2009 and risks a relapse in Doha as talks begin on a new global deal that is supposed to be adopted in 2015 and implemented in 2020.

The rich-poor divide is also deepened by arguments over climate aid meant to help developing countries convert to cleaner energy sources and adapt their infrastructure to rising sea levels and other effects of global warming.
Comments
Qatar climate change conference