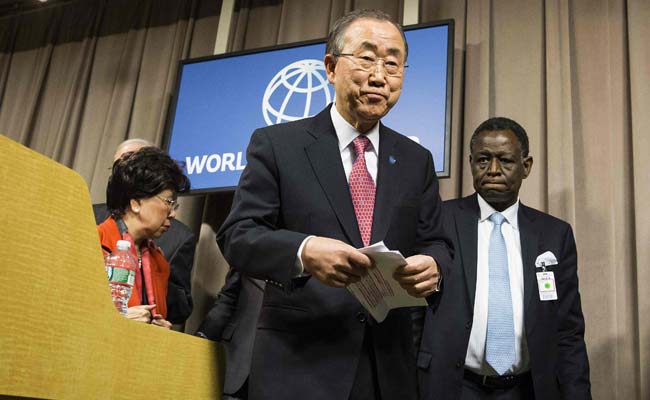 United Nations: UN Secretary-General Ban Ki-moon said on Thursday that he will travel to the Climate Conference in Peru next week and is hopeful that delegates will draft an agreement to reduce greenhouse gas emissions blamed for global warming.

Ban said he is encouraged by new targets for fossil fuel use announced recently by the United States and China, the world's two biggest polluters, as well as the European Union and Germany.

He said he is also encouraged by the recent launch of the Green Climate Fund, a UN initiative set up to support developing nations grappling with rising seas, higher temperatures and extreme weather events. The UN is "very close" to the $10 billion target for the fund, he said.

"All these encouraging developments and demonstration of political will and commitment (are) very encouraging, and I do hope that we will be able to have a draft text of the agreement," Ban said.

He called the Lima meeting "crucial."

Delegates from more than 190 countries are trying to produce a draft agreement that would be negotiated over the next year and adopted at a conference in Paris in December 2015. The two-week meeting in Peru's capital, Lima, ends December 12.

Promoted
Listen to the latest songs, only on JioSaavn.com
Divisions between rich and poor countries have slowed negotiations on a new climate pact over the years. But the breakthrough US-China emissions deal, announced last month by Presidents Barack Obama and Xi Jinping, injected new hope into the climate talks.

The US set a new target to reduce its emissions of heat-trapping gases by 26 per cent to 28 per cent by 2025 while China, whose emissions are growing as it builds new coal plants, set a target for its emission to peak by 2030, or earlier if possible.