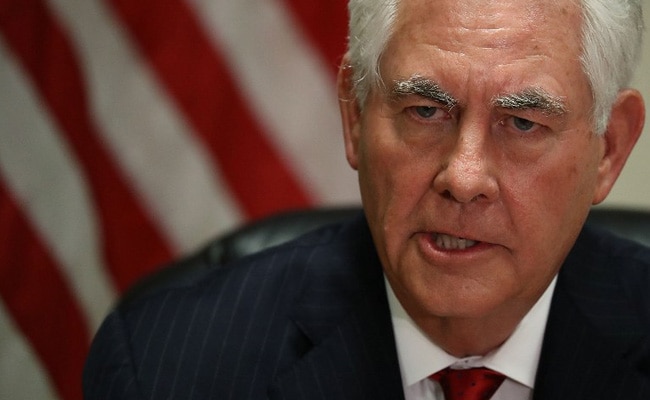 Rex Tillerson has said an "unchecked" Tehran could become another North Korea.(AFP)

Washington: US Secretary of State Rex Tillerson has termed the Iran nuclear deal a failure and said an "unchecked" Tehran could become another North Korea, but stopped short of threatening to derail the landmark agreement. Mr Tillerson said the US is conducting a comprehensive review of its Iran policy and added that the Obama-era nuclear deal only "delays" Tehran's goal of becoming a nuclear state.

"This deal represents the same failed approach of the past that brought us to the current imminent threat we face from North Korea.

The Trump administration has no intention of passing the buck to a future administration on Iran," he said at a hurriedly-convened press briefing. "Iran's nuclear ambitions are a grave risk to international peace and security," Mr Tillerson said.

His toughen stand on Iran came on Thursday, a day after the Trump administration notified the Congress that Tehran is complying with the 2015 nuclear deal negotiated by former President Barack Obama to limit the Islamic Republic's nuclear ability. The administration said it has extended the sanctions relief to Iran in exchange for curbs on its nuclear programme.

Iran has defended its nuclear programme as purely civilian and its supreme leader Ayatollah Khamenei warned in November that Tehran would retaliate if the US breached the nuclear agreement.

Mr Tillerson, seeking to reinforce the idea that the US is forcefully countering Iran's destabilising behaviour in the Middle East, also described Tehran as a "leading state sponsor of terror".

"The evidence is clear: Iran's provocative actions threaten the United States, the region and the world," he said.

"An unchecked Iran has the potential to travel the same path as North Korea and take the world along with it. The United States is keen to avoid a second piece of evidence that strategic patience is a failed approach."

Mr Tillerson accused Iran of intensifying multiple conflicts including the one in Syria, undermining US interests in several countries, continuing to support attacks against Israel, and sponsoring cyber and terror attacks across the world.

US Secretary of State Rex Tillerson's comments were synonymous with Donald Trump's rhetoric, who on many occasions - during his presidential campaign and afterwards - criticised the nuclear deal reached between Iran and the US, the UK, Russia, France, China and Germany.

But after he took office, the US president has not yet explicitly said he would pull out from the historic agreement.

Hours before he declared Iran nuclear deal a failure, Mr Tillerson sent a terse letter to the US House of Representatives speaker Paul Ryan, saying the administration has ordered an inter-agency review of whether the earlier suspension of sanctions, which was a necessity under the 2015 nuclear deal, was in the US' national security interests.

The six powers that negotiated the nuclear deal with the involvement from the European Union have set aside Iran's alleged support to terrorism in order to get a deal guaranteeing that the country would not be able to build a nuclear weapon for a decade and would remain under the eye of UN weapons inspectors.

In February, Mr Trump had described the nuclear deal with Iran as "the worst" agreement ever negotiated, calling the Islamic Republic the world's "number one terrorist state".

Israeli Prime Minister Benjamin Netanyahu had criticised the deal. He said in July 2015 that "Iran is going to receive a sure path to nuclear weapons."

But Mr Obama had said the deal would make the world safer and more secure. He had said in January 2016, after the deal was implemented, that "Iran will not get its hands on a nuclear bomb."

Promoted
Listen to the latest songs, only on JioSaavn.com
The disagreement between Mr Obama and Mr Netanyahu over the deal had strained US-Israel ties and Obama-Netanyahu relationship.

But after Mr Trump came to the White House in January, the Israel-US ties have witnessed a remarkable upswing, with Mr Trump and Mr Netanyahu jointly criticising Iran at a presser in February in the US. US President Donald Trump has also promised Israeli Prime Minister Benjamin Netanyahu he will not allow Iran develop a nuclear weapon ever.