Theresa May was talking about the challenge to her leadership in UK. 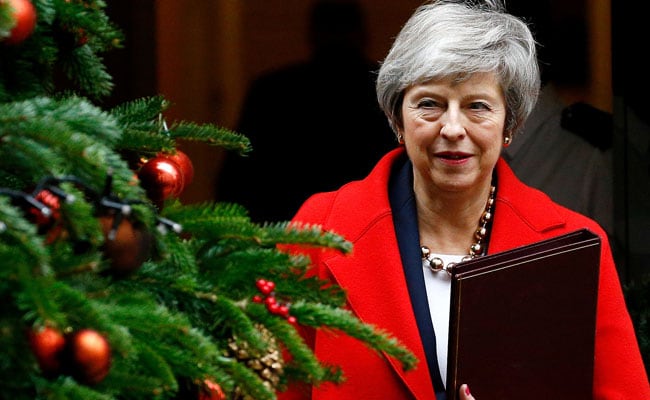 Theresa May was talking outside her residence in Downing Street. (File)

British Prime Minister Theresa May said she would fight a leadership challenge launched by lawmakers in her Conservative Party who are angry at her plans for Brexit.

Below is the statement she delivered outside her residence in Downing Street on Wednesday:

Sir Graham Brady has confirmed that he has received 48 letters from Conservative MPs so there will now be a vote of confidence in my leadership of the Conservative party.

I will contest that vote with everything I've got.

I have been a member of the Conservative party for over 40 years.

I have served it as an activist, councillor, MP, shadow minister, home secretary and now as prime minister.

I stood to be leader because I believe in the Conservative vision for a better future.

A thriving economy, with nowhere and nobody left behind.

A stronger society, where everyone can make the most of their talents.

And at this crucial moment in our history, that means securing a Brexit deal that delivers on the result of the EU referendum.

Taking back control of our borders, laws and money - but protecting jobs, our security and our precious Union as we do so.

Through good times and bad over the last two years, my passionate belief that such a deal is attainable, that a bright future lies ahead for our country, has not wavered.

And it is now within our grasp.

I spent yesterday meeting Chancellor Merkel, Prime Minister Rutte, President Tusk and President Juncker to address the concerns that MPs have with the backstop - and we are making progress.

I was due to travel to Dublin this afternoon to continue that work - but will now remain here in London to make the case for my leadership with my parliamentary colleagues.

A change of leadership in the Conservative party now will put our country's future at risk and create uncertainty when we can least afford it.

A new Leader wouldn't be in place by the 21st January legal deadline, so a leadership election risks handing control of the Brexit negotiations to opposition MPs in parliament.

The new Leader wouldn't have time to renegotiate a withdrawal agreement and get the legislation through parliament by 29th March - so one of their first acts would have to be extending or rescinding Article 50, delaying - or even stopping - Brexit when people want us to get on with it.

And a leadership election would not change the fundamentals of the negotiation or the Parliamentary arithmetic.

Weeks spent tearing ourselves apart will only create more division, just as we should be standing together to serve our country.

None of that would be in the national interest.

The only people whose interests would be served are Jeremy Corbyn and John McDonnell.

The British people want us to get on with it. And they want us to focus on the other vital issues that matter to them too.

We must - and we shall - deliver on the referendum vote and seize the opportunities that lie ahead.

But the Conservatives must not be a single issue party; we are a party of the whole nation.

Moderate, pragmatic, mainstream: committed to re-uniting our country and building a country that works for everyone - the agenda I set out in my first speech outside this front door.

Delivering the Brexit people voted for.

Building a country that works for everyone.

I have devoted myself unsparingly to these tasks ever since I became prime minister.

And I stand ready to finish the job.

(This story has not been edited by NDTV staff and is auto-generated from a syndicated feed.)
Comments
Theresa MayBrexitTheresa May Brexit