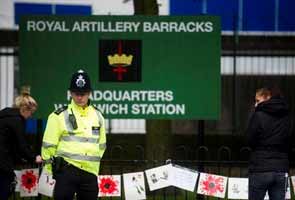 London: British police arrested a tenth suspect in connection with the killing of a soldier in London, an apparent Islamic extremist attack that has horrified the country and heightened racial tensions.

The 50-year-old man was detained in Welling, east of London, on suspicion of conspiring to murder 25-year-old soldier Lee Rigby, Scotland Yard said. Police gave no further information about the suspect's identity.

The latest arrest came as more details trickled out about the background of Michael Adebolajo, 28, one of the two main British suspects in Wednesday's slaying. He and Michael Adebowale, 22, were shot and wounded by police at the scene.

Rigby, an off-duty soldier who had served in Afghanistan, was run over by a vehicle and repeatedly attacked with meat cleavers Wednesday afternoon near his barracks in southeast London.

British officials say the two main suspects had been known to them for some time, but revelations that Adebolajo had been arrested in Kenya in 2010 - and claims that British security officials had tried to recruit him as an informer after that - have fueled questions about whether UK authorities could have done more to prevent last week's killing.

Adebolajo and Adebowale remain under armed guard in separate London hospitals. Four other men and the suspect arrested Monday remain in custody at a London police station, while one other man has been released on bail. Two women were released without charge in the case.

On Monday, a London-based rights group that lobbies on behalf of suspected terrorists said Adebolajo and his family had contacted it about six months ago complaining about harassment from Britain's MI5 domestic spy service. A case worker who spoke with him said he appeared "paranoid and erratic," the group said.

"His sister contacted the office to complain about constant harassment from MI5, which extended to Michael, his brother, and his father also," said Moazzam Begg of the London-based group CagePrisoners.

"They were all being approached in different ways," Begg told The Associated Press in a telephone interview. "One of them, he lived and worked abroad. He'd been approached by MI6 (Britain's external espionage agency) at his workplace and had been offered some money. They wanted him to work for them."

Begg said Adebolajo told the caseworker he had been tortured and threatened with rape while in Kenya, and that he had been interrogated for several hours upon his return to London. At first, British intelligence services let him be, Begg said, but in March 2012 they met with him and offered him a job as an informant. Adebolajo refused, he said.

Kenyan officials on Sunday said Adebolajo was arrested in Kenya in 2010 with five others near the country's border with Somalia. Police believed that Adebolajo was going to work with the Somali Islamic militant group al-Shabab.

Kenyan government spokesman Muthui Kariuki told the AP that Adebolajo, who was carrying a British passport, was taken to court before he was handed over to British authorities in Kenya.

Britain's Foreign Office confirmed that Adebolajo was arrested in Kenya in 2010 and said the agency "provided consular assistance."

It was not clear how Adebolajo came to be arrested and how he returned to London. Kenyan officials have denied allegations that he was tortured under interrogation. On Monday, Kenya's police chief David Kimaiyo added confusion by contradicting earlier claims and saying that Adebolajo had "never been arrested in Kenya."

Rigby's killing and Adebolajo's apparent links to radical Islam have fed a spike in anti-Muslim sentiment in Britain, with police and activists reporting a surge in hate crimes, violence and vandalism.

Around 1,000 supporters of the far-right group English Defense League marched through central London on Monday to protest the soldier's killing, clashing with a smaller group of anti-fascist demonstrators and scuffling with riot police. Police arrested 13 people, mostly on suspicion of causing public disorder.

A mosque in the northern England town of Grimsby was firebombed Sunday night, according to the mosque's chairman, Diler Gharib. Police said they arrested two people and the fire was extinguished without injuries.