Typhoon Maysak -- named after the Cambodian word for a type of tree -- made landfall early Thursday in Busan on the southern coast, knocking down traffic lights and trees and flooding streets. 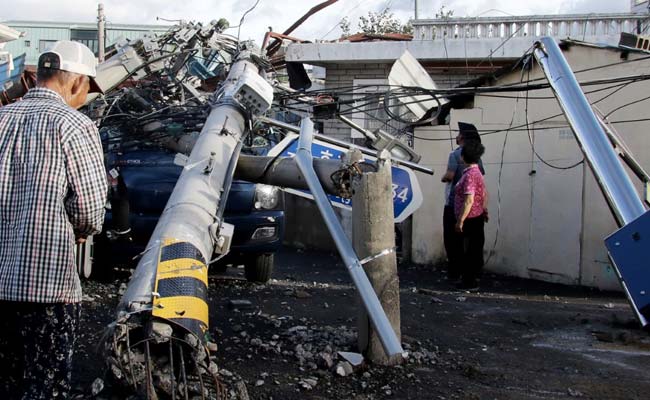 At least one person was killed and more than 2,000 people evacuated to temporary shelters in South Korea as a powerful typhoon churned across the peninsula, authorities said Thursday.

Typhoon Maysak -- named after the Cambodian word for a type of tree -- made landfall early Thursday in Busan on the southern coast, knocking down traffic lights and trees and flooding streets.

A woman was killed after a strong gust shattered her apartment window in Busan, while a man in his 60s was injured when the wind toppled an outdoor refrigerator, crushing him.

More than 2,200 people evacuated to temporary shelters and around 120,000 homes left without power throughout the night across southern parts of the country and on Jeju Island.

Maysak was making its way up the eastern side of the peninsula into the Sea of Japan, known as the East Sea in Korea, packing gusts of up to 140 kilometres per hour (87 miles per hour).

Maysak was forecast to make landfall again in North Korea at around 0300 GMT at Kimchaek, in North Hamgyong province.

Natural disasters tend to have a greater impact in the North due to its creaking infrastructure, and the country is vulnerable to flooding as many mountains and hills have long been deforested.

Pyongyang's state media was on high alert, carrying live broadcasts of the situation.

"The trait of this typhoon is that it has brought heavy precipitation," said a news reporter for Korean Central Television in its early morning newscast, standing in an inundated street in the eastern port of Wonsan.

Maysak is the second typhoon in a week to hit the peninsula.