Eric Van Der Sypt, spokesman for the Belgian federal prosecutors office, said there were elements that point in the direction that this was a terrorist act. 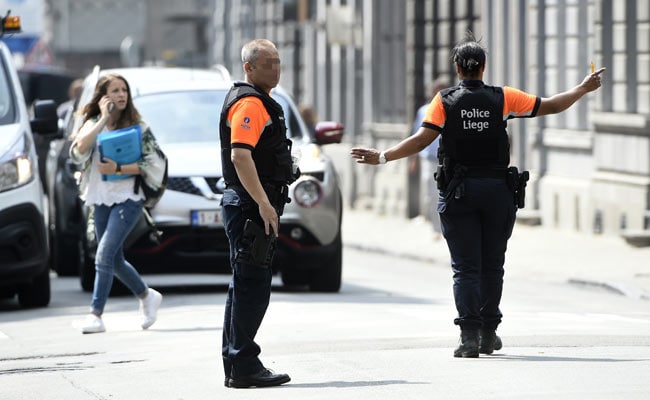 The shooting took place at the Belgian city of Liege (Representational)

Brussels, Belgium: A gunman shot dead three people, two of them police officers, in a suspected terror attack in the eastern Belgian city of Liege on Tuesday before being killed by elite officers, prosecutors told AFP.

The shooting occurred around 10:30 am (0830 GMT) near a high school on a major artery in the city, which lies some 90 kilometres (55 miles) east of Brussels.

Federal prosecutors took charge of the incident, which comes with Belgium on high alert after a string of attacks including twin suicide bombings in Brussels in 2016 claimed by the Islamic State group.

"There are elements that point in the direction that this is a terrorist act," said Eric Van Der Sypt, spokesman for the Belgian federal prosecutors office.

After shooting the two police officers outside a cafe, the gunman fled to the Lycee Waha school, where he briefly took a hostage, according to officials.

The third victim was a "passerby in a vehicle" who was driving in the area, Liege prosecutors' spokeswoman Catherine Collignon told AFP.

According to Belgian broadcaster RTBF, the shooter was released from prison on Monday and was only known for minor infractions with no known links to extremism.

Prime Minister Charles Michel said his thoughts were with the families of the victims after what he called a "serious incident", adding that he would not give further details at this stage.

"Our thoughts are with the victims of this horrible act. We are in the process of establishing an overview of exactly what happened," Jambon wrote on Twitter.

The crisis centre said a security cordon had been set up around the area and urged people to stay away.

The governor of Liege province, Herve Jamar, said on Twitter that no-one was injured during the high school hostage-taking and all students were safe.

Belgium has been on high alert since the smashing of a terror cell in the town of Verviers in January 2015 that was planning an attack on police.

The Verviers cell also had links to Abdelhamid Abaaoud, the mastermind of the November 2015 Islamic State attacks on Paris that killed 130 people.

Belgium further raised its terror alert level after the Paris attack, and placed the capital Brussels on lockdown for a week.

Belgium was then hit by its own IS suicide attacks on Brussels airport and a metro station which killed 32 people in 2016.

In August of 2016 a machete-wielding man shouting "Allahu Akbar" (God is greatest)  attacked two policewomen in the industrial town of Charleroi, before being shot dead.

Promoted
Listen to the latest songs, only on JioSaavn.com
The country's law enforcement agencies and intelligence services came under intense scrutiny for apparently missing a series of leads after the Paris attacks that could have led to the Brussels bombers.

(This story has not been edited by NDTV staff and is auto-generated from a syndicated feed.)
Comments
Belgian city of Liege2 Police man KilledShooting