The AI scientists digitally replaced Halle Bailey- who is black with a fake white character. 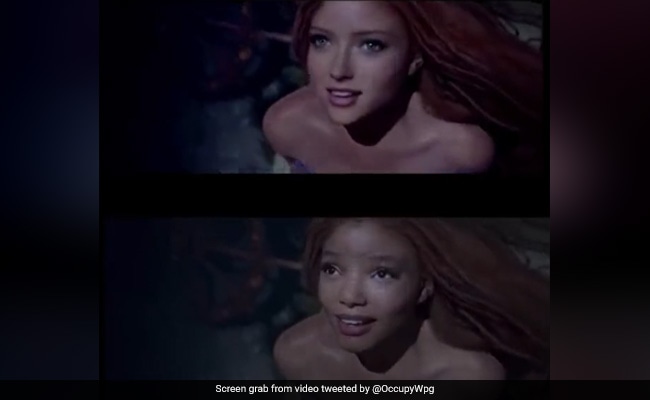 Twitter recently suspended two accounts after artificial intelligence scientists shared a modified and 'racist' clip from Disney's latest movie ‘The Little Mermaid'. The short clip whitewashed the skin of actor Halle Bailey, who is playing the role of Ariel. The scientist digitally replaced Ms Bailey- who is black with a fake white character.

The trailer of ‘The Little Mermaid' did not receive good reactions from the internet. The trailer of the film reportedly received 1.5 million dislikes on Youtube from ‘racist viewers' who are not happy with Disney's action to change the previously white-skinned, red Ariel to now a black woman, reported New York Post.

Few social media users took this to another level and ‘fixed' the clip by using artificial intelligence and making the black Ariel into a white woman. A tweet by @TenGazillioinIQ (now suspended) read, ““He fixed The Little Mermaid and turned the woke actor into a ginger white girl,” the promoter said in their own tweet. “He says he can fix the whole move comes out with 4x A6000 in 24 hours. It's over for wokecels.”

Soon after his controversial tweet, he posted a follow-up tweet and said the altercations were purely educational and asked his followers not to misinterpret it.

The user added: 'I am just amazed by a high-IQ friend who works with Artificial Intelligence and the stuff he can make, and wanted to show people his field of study.'

🎶"Wish I could be part of that AI"🎶 pic.twitter.com/C1V8xogBgq

Fans were quick to slam these users. A user wrote, “What kind of racist nonsense is this? People were so upset about a non-white but talented actress and singer playing Ariel that they decided to whitewash her and try to erase/invalidate Hallie's racial heritage with misuse of AI technology?”, another user wrote, “Don't want the black face, but sure to keep the black singing voice. Says everything.” “I'm not racist, I just ‘fixed' a kid's movie by changing the main character's race. Totally not racist,” a user mocked.

Pak Army Chief's Record - And Why It's So Relevant To India