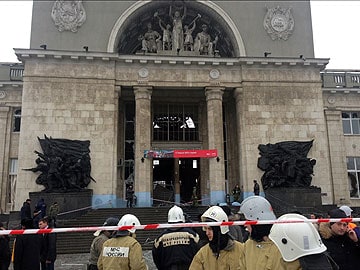 Russian firefighters and security personnel inspect the damage at a train station following a suicide attack in the Volga River city of Volgograd.

Moscow: Successive-day bombings on a railway station and a trolleybus in Russia's heartland exposed the challenge President Vladimir Putin faces in ensuring a safe Olympics on the edge of the violence-plagued North Caucasus.

The Kremlin chief beat extreme odds in 2007 to bring the showcase winter event to the summer Black Sea retreat of Sochi after personally pledging before Olympic chiefs in Guatemala to make the Games into a "safe, enjoyable and memorable experience".

Russia has since poured more than $50 billion into an event that has become linked inextricably with Mr Putin's image as a strongman fighting to restore the superpower status his nation enjoyed in Soviet times.

But Putin's 14-year rule has also been tied to North Caucasus conflicts that began in Chechnya and have since spread across the mostly-Muslim region that Islamists want to turn into their own state.

Russia is already imposing a "limited access" cordon around Sochi from January 7 to keep non-resident cars from coming anywhere near the Olympic venue.

Extra measures are also being taken to monitor local Internet and cellphone network traffic that could herald the plotting of still new attacks.

Yet the twin blasts in Volgograd - a million-strong city revered by Russians for enduring the epic World War II Battle of Stalingrad - show that strikes do not have to target Sochi directly to set off Olympic alarms.

"They tried to deal a blow to Sochi," Volgograd's parliament representative Mikhail Markelov said as the combined death toll from both attacks climbed to 31.

"This was a serious intimidation attempt."

From 'lone wolves' to Syria vets

Two decades of nearly uninterrupted bloodshed along Russia's impoverished southern frontier has bred a generation of recruits for gangs of guerrillas who wage wars both at home and abroad.

Chechen gunmen have become a frequent presence among the Syria rebels and are among the Russian security forces' biggest adversaries in cities such as Moscow where they congregate around criminal groups.

"We have to fear everyone from so-called lone wolves to Russian Muslims and those who fought in and returned from Syria," said Alexei Malashenko of the Carnegie Moscow Centre.

"We do not know where or when the next blow will happen, but we do know that it will."

Analysts said events such as Sochi present Russia's Islamists with the perfect venue for raising prestige among financial backers and displaying their unbridled strength.

"They want to make the strikes as deadly as possible to generate the greatest amount of publicity," said Alexander Konovalov of Moscow's Institute Strategic Assessment.

He stressed that "chances of this happening in Sochi itself are low because the security there is so high. But this extra Sochi security means there is less of it elsewhere in Russia."

The US-based IHS risk assessment centre agreed that steps taken in Sochi "will make it difficult to undertake a successful attack against the main Olympic venues."

But "public transport infrastructure in Sochi and the surrounding Krasnodar territory will face an elevated risk of attack," IHS analyst Matthew Clements warned in a client note.

Putin on Monday ordered security stepped up across Russia and demanded to be briefed daily on the probe into the bombings as well as efforts to make people feel safer as the February 7-23 Games approach.

But some called Russia's overstretched and corruption-riven security structures a feeble shield against the terror threat.

Promoted
Listen to the latest songs, only on JioSaavn.com
The Federal Security Service that Mr Putin headed before taking the Kremlin "cannot control the situation or predict what the 'underground' will do next," said military affairs writer Pavel Felgenhauer.

"And this will affect the Games even if there are no explosions in Sochi."