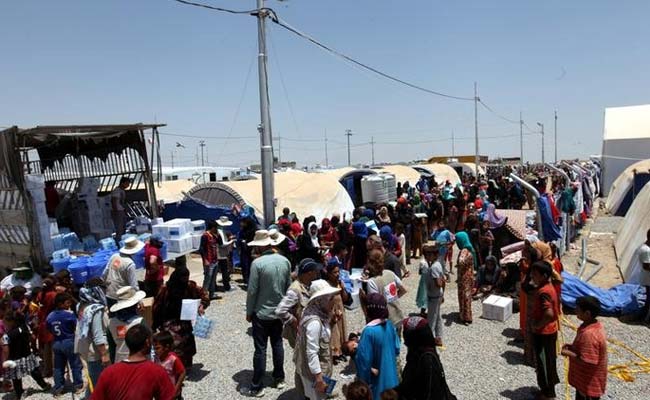 Displaced Iraqi people, who fled from Mosul, gather at a refugee camp in the Makhmour, June 15, 2016.

ANKARA: The Turkish Red Crescent is sending trucks of aid to northern Iraq with enough food and humanitarian supplies for 10,000 people displaced by fighting in Mosul, the president of the agency said on Friday.

Iraqi and Kurdish forces have seized territory around Mosul in recent days in preparation for a long-anticipated offensive on the last major stronghold held by Islamic State in Iraq. Turkey has warned of a potential wave of refugees.

"In the first stage, we are sending this aid to the nearly 30 villages around Mosul that have been liberated. There are 3,000 to 4,000 people on the move from those villages, the trucks aim to reach them," Kerem Kinik, president of the Turkish Red Crescent, told Reuters.

The 20-truck convoy is carrying supplies including dried food, clothing and several hundred tents and beds. It also has enough clothing for as many as 35,000 people.

Kinik said between 150,000-400,000 people could ultimately be displaced from Mosul and that additional camps, on top of more than 40 already in place, were being built by Turkish aid agencies in northern Iraq in preparation.

Promoted
Listen to the latest songs, only on JioSaavn.com
"In a bad scenario, a new refugee camp, one for 100,000 people, could be built. The current camps are for 20,000 people," Kinik said, adding that the Red Crescent was working in coordination with northern Iraq's regional government and with the United Nations' humanitarian arm, OCHA.
© Thomson Reuters 2016