Turkey's Refugee Policy Under Spotlight as Migrants Decamp to Europe 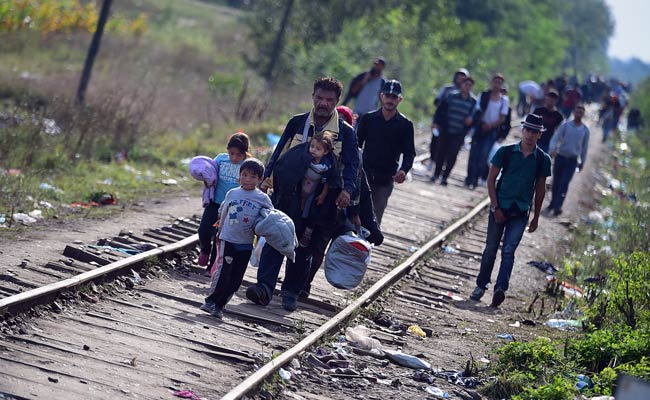 Ankara: On seeing the images that shocked the world of the body of a three-year-old Syrian refugee, Aylan Kurdi, washed up on a Turkish beach, President Recep Tayyip Erdogan reached for the phone and called the child's grief-stricken father.

"Why did you leave us?" Erdogan wanted to know. "If you had stayed your family would still be alive."

It is a question that is often asked of the hundreds of thousands of Syrians risking their lives to try to reach Europe, and one that raises uncomfortable questions about the conditions they endure in Turkey.

Many of the refugees setting out in rickety boats from Turkey have spent months, sometimes years in the country before setting sail for Greece, the closest EU country.

Turkey has taken in more than two million Syrians since the start of the war under an open-door policy that is a source of pride for many Turks, especially given the rough treatment they see being meted out to migrants in some European countries.

But analysts warn that Ankara is also failing Syrians, saying Turkey's refusal to give them refugee status is among the factors driving the current exodus to Europe.

"We demanded freedom during our revolution. And when we came here we tried to live a normal life, but we worked like slaves.

So we are trying to go to Europe just to live like normal people," Youssef, a 25-year-old engineer trying to reach Greece through the northwestern Turkish city of Edirne, told AFP.

Life is a struggle for most Syrians in Turkey, who live mostly off of odd jobs that are often insufficient to feed and house a family.

In Istanbul, Syrian children begging on the street have become a common sight.

"Turkey started as a success story with its five-star (refugee) camps and open-door policy," said Metin Corabatir, president of the Ankara-based Research Center on Asylum and Migration.

"But it is turning into a story of failure," he told AFP.

Turkey, which says it has spent $7.6 billion (6.6 billion euros) on Syrian refugees since 2011, has blamed the refugee crisis on Europe, accusing it of failing to help lighten the load.

After Aylan's death, Erdogan lashed out at the European Union, accusing it of turning the Mediterranean into a migrant "cemetery".

European leaders have pledged increased support for Turkey's refugee efforts, with discussions under way on an aid package worth up to one billion euros to encourage migrants to stay in the country.

But analysts say Turkey has also fallen short of the mark, by failing to develop a proper asylum policy that would give refugees access to jobs and basic services.

Ankara refuses refugee status to non-Europeans, applying only a limited version of the Geneva Convention on the treatment of victims of war -- a fact for which it has been rapped by the UN refugee agency.

Syrians are admitted only as temporary asylum seekers and referred to as "guests".

Commenting on the terminology, Murat Erdogan, director of the Migration and Politics Research Centre at Ankara's Hacettepe University, said: "Guests do not have rights, refugees do."

Turkish officials argue that the country's location at the crossroads between Europe and the Middle East make it merely a way station on refugees' road to a perceived better life in the West.

"We don't see temporary protection as a shortcoming, but as a protective mechanism," a senior government official, who did not wish to be named, told AFP.

The official blamed the surge in people trying to smuggle themselves into Europe illegally on delays by third countries in processing asylum claims forwarded by Turkey.

For Corabatir, however, proper refugee status is a rights issue.

"Syrians are entitled to basic rights. The objective must be to transfer them from charity receivers to contributors to the economy."

Turkey insists it does care for refugees pointing to the high standards of care at 25 camps housing 260,000 Syrians, which offer basic education in Arabic, Internet and vocational training.

But the vast majority of the refugees live outside of the camps, with little to no access to education and health care.

The issue of aid is a delicate one for the government, with more and more Turks coming to resent the refugees, whom they see as a drain on state resources and rivals for scarce jobs.

Some also openly express fears of an "Arabisation" of Turkish society.

The disillusionment cuts both ways.

Jihad, a 22-year-old Syrian chemistry student, was on his third attempt to reach the Greek border last week, having twice been sent back by police.

"I don't see a future for myself here," he said. "I have friends in Europe and they tell me that no matter how hard it is to get there, everything is much better in Europe."
Comments
ErdoganSyrian refugeemigrant crisismigrantsankaraturkeyistanbul