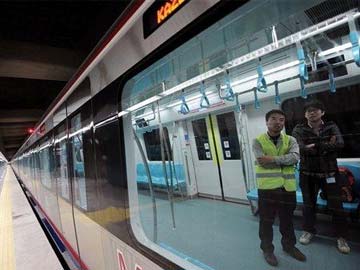 Istanbul: Turkey opened the world's first underwater rail link between two continents on Tuesday, connecting Asia and Europe and allowing Prime Minister Tayyip Erdogan to realise a project dreamt up by Ottoman sultans more than a century ago.

The engineering feat spans 13 km to link Europe with Asia some 60 metres below the Bosphorus Strait. Called the Marmaray, it will carry subway commuters in Europe's biggest city and eventually serve high-speed and freight trains.

"Today we are realizing the dreams of 150 years ago, uniting the two continents and the people of these two continents," Erdogan said at the opening, which coincides with the 90th anniversary of the founding of the modern Turkish Republic.

The 5.5 billion lira tunnel is one of Erdogan's "mega projects," an unprecedented building spree designed to change the face of Turkey.

They include a 50-km canal to rival the Suez that would render half of Istanbul an island, an airport that will be the world's busiest and a giant mosque atop an Istanbul hill.

Atomic power stations are on the drawing table. A third bridge over the Bosphorus, whose construction has already felled 1 million trees, is under way.

The plans have fired up Erdogan's opponents who dub them "pharaonic projects," symptom of an increasingly authoritarian style of government, and warn of environmental catastrophes in one of world's most earthquake-prone nations.

They accuse Erdogan, still broadly popular after 10 years in power, of bypassing city planners and bulldozing history to make way for pet projects in an ancient city that was the capital of the Byzantine Empire, then after the 1453 Islamic conquest became the centre of Ottoman power.

"System error. Please load another system. Your time's up Tayyip," read a banner hung by a leftist group at the Maiden's Tower, on an islet at the southern entrance to the Bosphorus.

A small environmental effort to save an Istanbul park in late May grew into the biggest anti-government protests in decades. Besides engineering projects, Erdogan has wrought radical social change, breaking the traditional power of the secularist army and drawing accusations from some that he pursues an Islamist agenda, something he denies.

Erdogan argues his policies meet the needs of a rapidly expanding and increasingly affluent population.

"Roads are civilisation," he said last week. "Our values recognise no obstacle for roads. If a mosque is where a road will go, we will tear down that mosque and build it elsewhere."

Erdogan has called the Marmaray the project of the century and says it fulfils an age-old "dream of our ancestors".

Plans for a rail tunnel below the Bosphorus date to at least 1891, when Ottoman Sultan Abdulhamid, a patron of public works whom Erdogan frequently evokes, had French engineers draft a submerged tunnel on columns that was never built.

Today, the gleaming Marmaray is an immersed tube set in the seabed built by Japan's Taisei with Turkish partners Nurol and Gama. The bulk of financing came from the Japan Bank for International Cooperation.

"Japan and Turkey are the two wings of Asia. Let us dream together of a high-speed train departing from Tokyo, passing through Istanbul and arriving in London," said Japanese Prime Minister Shinzo Abe, who attended the opening.

Money for the other infrastructure schemes may prove more difficult to come by as global liquidity tightens, and that may force Erdogan to scale back plans or scrap some altogether, said Atilla Yesilada, an analyst with GlobalSource Partners.

The mega projects would add at least $180 billion to Turkey's foreign debt stock, he said, further swelling an already massive current account deficit, which the IMF says may reach 7 percent of economic output this year.

"Rather than having a social utility, some of these seem to be legacy projects: Erdogan trying to leave his mark on the Turkish landscape and history," Yesilada said. "It is like pharaohs building more pyramids to their names."

Political patronage also plays a part, Yesilada said. Companies close to the government often win construction tenders, and as in other emerging markets, construction is an economic motor.

Turkey plans to spend $250 billion on roads, energy and IT infrastructure alone over the next decade.

But Transport Minister Binali Yildirim dismissed the concerns about financing as mere envy.

"Half of the world is at war, the other half is in an economic slowdown, while Turkey is carrying out its big projects," he said. "There's no need for this jealousy."

The Union of Chambers of Turkish Engineers and Architects warned the Marmaray set on a silty seabed 20 km from the active North Anatolian Fault is at risk in case of a large earthquake, which geologists predict may strike within a generation.

But Yildirim described the Marmaray as the "safest structure in Istanbul," its free-floating structure designed to withstand an earthquake with a magnitude of 9. Interlocking floodgates would seal off each section.

The Marmaray will reduce car traffic by 20 percent in Istanbul, among the world's most congested, when it eventually carries 1.5 million people a day.

"The historical peninsula has remained intact for 25 centuries, like the eye of the storm, because of the natural barriers of the Golden Horn and Bosphorus waterways," Guvenc said. "The Marmaray removes those boundaries."

Construction of the tunnel on the European side yielded a Byzantine port with more than 13 shipwrecks and thousands of other relics that date back as far as 8,500 years.

The finds nearly doubled the project's duration and prompted UNESCO, the United Nations' cultural arm, to voice concern about threats to the peninsula, a World Heritage site.

Promoted
Listen to the latest songs, only on JioSaavn.com
The government will open an "archaeological park" at the Yenikapi subway station to showcase relics. Station walls are decorated in a Hellenic theme with amphoras and galleons.