Turkey May Be "Responsible" For Executions Of Kurds In Syria: UN

The Kurdish-dominated Syrian Democratic Forces said over the weekend that at least nine civilians were "executed" as part of Turkey's incursion into northeastern Syria, which began nearly a week ago. 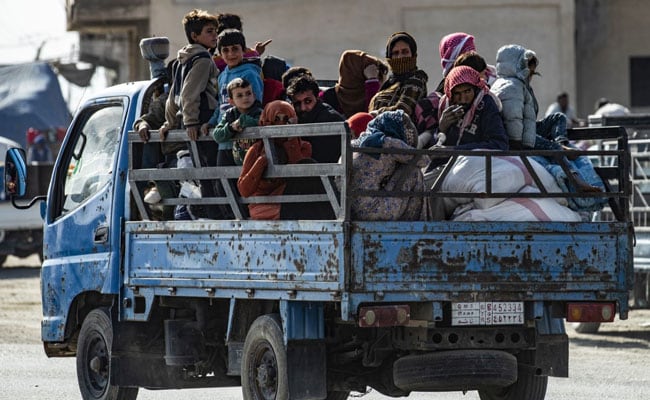 Turkey could be deemed responsible as a state for violations committed by their affiliated armed groups.

The UN warned Tuesday that reported summary executions of civilians in northeastern Syria carried out by pro-Turkish fighters could amount to a "war crime" and that Ankara could be "deemed responsible".

The Kurdish-dominated Syrian Democratic Forces said over the weekend that at least nine civilians were "executed" as part of Turkey's incursion into northeastern Syria, which began nearly a week ago.

Among them was 35-year-old Hevrin Khalaf, the secretary-general of the Future Syria Party, who according to the forces was taken out of her car and killed by Turkish-allied Syrian fighters.

The UN rights office said its staff had viewed two separate pieces of video footage "showing what appears to be summary executions carried out by fighters belonging to the Ahrar al-Sharqiya armed group, which is affiliated with Turkey, on 12 October."

Spokesman Rupert Colville said the footage, which has been widely shared on social media, appeared "to show the fighters filming themselves capturing and executing three Kurdish captives" on the main highway.

"Only one of the captives appeared to be wearing a military uniform," he told reporters in Geneva, adding that the office had also received reports of Khalaf's execution the same day "on the same highway".

He said the UN was working to verify the footage and confirm the details of the events, but stressed that under international law, "summary executions are serious violations, and may amount to a war crime."

He warned that "Turkey could be deemed responsible as a state for violations committed by their affiliated armed groups, as long as Turkey exercises effective control over these groups or the operations in the course of which those violations occurred."

Colville called on Ankara "to immediately launch an impartial, transparent and independent investigation into both incidents."

Turkey, he said, must also "apprehend those responsible, some of whom should be easily identifiable from the video footage they themselves shared on social media."

Since the Turkish offensive began last Wednesday, Colville said that the UN rights office had been able to verify a number of civilian deaths each day in northeastern Syria due to "airstrikes, ground-based strikes, and sniper fire."

He pointed in particular to an airstrike that hit a convoy of vehicles on Sunday, which reportedly killed "at least four civilians, including two journalists" and injured dozens of others.

He said the UN was "appalled" by a number of attacks on medical facilities in the region.

As of Monday, he said the UN had received reports of five facilities hit -- all of them allegedly by airstrikes or ground-based strikes carried out by Turkish forces and their allies.

(This story has not been edited by NDTV staff and is auto-generated from a syndicated feed.)
Comments
SyriaUNTurkey