In a tweet Friday, Trump seemed to deny using the term "shithole" to refer to some countries during a private White House meeting Thursday, but acknowledged he used "tough" language during the negotiations. 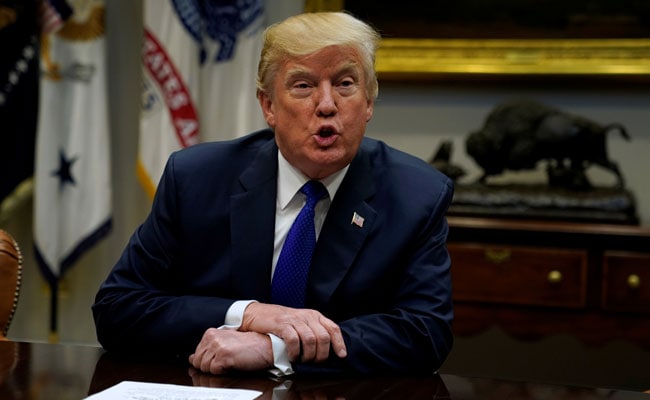 Trump also suggested that the US should bring more people from countries like Norway. (File)

President Donald Trump's comments about African countries and Haiti drew condemnation from around the world Friday, putting the White House and Republicans on the defensive while casting doubt on hopes of resolving disputes in the coming weeks over immigration legislation.

In a tweet Friday, Trump seemed to deny using the term "shithole" to refer to some countries during a private White House meeting Thursday, but acknowledged he used "tough" language during the negotiations. Among Republicans, there were differing responses to the comments, but few of them outright condemned his remarks.

The lone Democrat present for the Oval Office encounter said that Trump's denial was false and the president "said things that were hate-filled, vile and racist."

"I cannot believe that in the history of the White House, in that Oval Office, any president has ever spoken the words that I personally heard our president speak yesterday," Sen. Richard Durbin, D-Ill., told reporters.

In a sign that the outcry over Trump's remarks are unlikely to abate quickly, senior House Democrats said that they planned next week to introduce a resolution censuring the president for his comments.

A day after the White House did not deny that Trump used the vulgarity, first reported by The Washington Post, Trump dove into the controversy and blasted out his own version of the meeting early Friday morning on Twitter.

"The language used by me at the DACA meeting was tough, but this was not the language used. What was really tough was the outlandish proposal made - a big setback for DACA!" Trump wrote, referring to negotiations over the Obama administration's Deferred Action for Childhood Arrivals program that allowed children brought to the country illegally, known as "dreamers," to avoid deportation.

But Trump's attempt at a denial did little to quell the international outrage at his reported comments that the United States should seek immigrants from countries such as Norway instead of African and Latin American nations.

"There is no other word one can use but 'racist,' " United Nations human rights spokesman Rupert Colville said at a briefing in Geneva. "You cannot dismiss entire countries and continents as 'shitholes,' whose entire populations, who are not white, are therefore not welcome."

Ebba Kalondo, the spokeswoman for the African Union, said the comments were alarming.

"Considering the historical reality of how many Africans arrived in the U.S. during the Atlantic slave trade, this flies in the face of all accepted behavior and practice," she said.

The controversy began Thursday when the president grew frustrated with lawmakers during an Oval Office meeting as they discussed protecting immigrants from Haiti, El Salvador and African countries as part of a bipartisan deal over the "dreamers," according to several people briefed on the meeting.

"Why are we having all these people from shithole countries come here?" Trump said, according to these people, referring to countries mentioned by the lawmakers.

Trump then suggested that the United States should instead bring more people from countries such as Norway, whose prime minister he met with Wednesday.

A White House official said Trump also suggested that he would be open to more immigrants from Asian countries because he felt that they help the United States economically.

In addition, the president singled out Haiti, telling lawmakers that immigrants from that country must be left out of any deal, these people said.

"Why do we need more Haitians?" Trump said, according to people familiar with the meeting. "Take them out."

In November, the Trump administration rescinded deportation protection granted to nearly 60,000 Haitians after the 2010 earthquake and told them to return home by July 2019. This week the administration announced that similar protections for roughly 200,000 El Salvadorans will end in Sept. 2019 - unless Congress enacts legislation providing them permanent legal status.

In another tweet Friday, Trump focused on remarks attributed to him about Haiti, saying: "Never said anything derogatory about Haitians other than Haiti is, obviously, a very poor and troubled country. Never said "take them out." Made up by Dems. I have a wonderful relationship with Haitians. Probably should record future meetings - unfortunately, no trust!"

Reaction to Trump's remarks across the political spectrum and around the globe mirrored what has happened in the past - hastily-arranged meetings among diplomats, outrage and sharp criticism from Democrats, and measured comments by Republicans.

Sen. Jeff Flake, R-Ariz., who has been negotiating the immigration policy deal with Durbin and Sen. Lindsey Graham, R-S.C., said in an interview with The Post that he was not at the meeting, but heard about Trump's comments "before it went public. And what I've heard reported is consistent about what I heard about the meeting."

Flake said that Thursday's comments reflect what Trump has reportedly said in the past about Haiti and Nigeria. "I'm not surprised at the sentiment expressed - it's consistent with what he's said - but that he would do that knowing the fury it would cause."

In a statement Friday afternoon, Graham, who as at the meeting, did not specifically address what Trump said.

"Following comments by the President, I said my piece directly to him yesterday," he said. "The President and all those attending the meeting know what I said and how I feel. I've always believed that America is an idea, not defined by its people but by its ideals."

On Friday, Sen. Tim Scott, R-S.C., told a South Carolina newspaper that Graham told him that the reported comments are "basically accurate."

In a joint statement, Sens. Tom Cotton, R-Ark., and David Perdue, R-Ga., - two of Trump's biggest allies on Capitol Hill who attended Thursday's meeting - said, "We do not recall the president saying these comments specifically but what he did call out was the imbalance in our current immigration system, which does not protect American workers and our national interest."

Trump, the senators said, "brought everyone to the table this week and listened to both sides. But regrettably, it seems that not everyone is committed to negotiating in good faith."

Cotton and Perdue are co-sponsors of legislation that would enact severe restrictions on legal immigration - a bill Trump has said he supports, but that senior GOP leaders have said could not pass Congress.

Rep. Mario Diaz-Balart, R-Fla., who also attended the meeting, did not address the comments in a statement issued by his office Friday.

"There are almost 800,000 young DACA beneficiaries who are facing imminent deportation in March if we don't reach a deal," he said. "I'm not going to be diverted from all possible efforts to continue to negotiate to reach a deal. So statements at the eleventh hour are not going to distract me."

An immigration hard-liner in Congress, Rep. Steve King, R-Iowa, tweeted support for Trump's remarks Friday: "If those countries aren't as you described, Democrats should be happy to deport criminal aliens back to them. &End #AnchorBabies, too."

In the wake of news reports about his comments, Trump initially was not particularly upset by the outcry and spent a portion of Thursday night calling friends and confidants to assess the potential fallout - part of his routine attempts to take the temperature of longtime contacts, according to a White House official familiar with the situation, granted anonymity to speak frankly about the president's response.

While Trump does not generally enjoy widespread negative media coverage of his more controversial statements, the official added he is cognizant that the situation will likely be perceived differently in Washington and on television news compared to with his political base across the country.

Hillary Clinton, Trump's 2016 Democratic rival, weighed in, tweeting that Friday's eighth anniversary of a major earthquake in Haiti "is a day to remember the tragedy, honor the resilient people of Haiti, & affirm America's commitment to helping our neighbors. Instead, we're subjected to Trump's ignorant, racist views of anyone who doesn't look like him."

Left unanswered is how much damage Trump's comments have done to the ability of Congress to soon reach a deal on DACA.

Durbin said in a written statement on Friday that he and others in his bipartisan group will continue pressing for an agreement. It "continues to build support for the only deal in town," he said.

Graham voiced a similar sentiment in his statement.

Promoted
Listen to the latest songs, only on JioSaavn.com
"I believe it is vitally important to come to a bipartisan solution to the immigration and border challenges we face today," he said. "I am committed to working with Republicans and Democrats to find common ground so we can move forward."

(Except for the headline, this story has not been edited by NDTV staff and is published from a syndicated feed.)
Comments
Shithole countriesDonald Trump