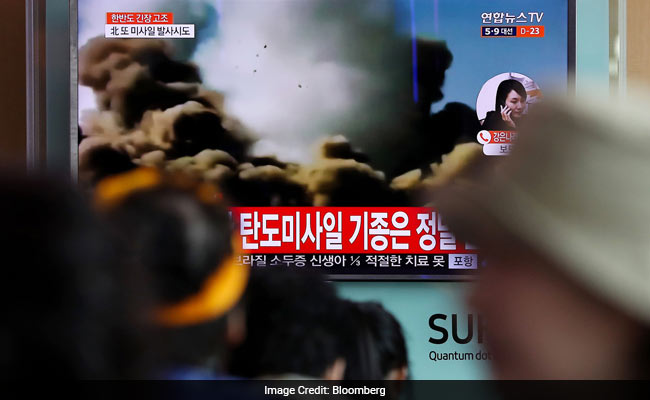 In the wake of North Korea's failed medium-range missile test this weekend, President Donald Trump is willing to consider ordering "kinetic" military action, including a sudden strike, to counteract North Korea's destabilizing actions in the region, said a person familiar with the White House's thinking.

But Trump's very strong preference is for China to take the lead on dealing with North Korea, said the person, who asked not to be named because the discussions are private.

Trump's strategy isn't exactly a departure from long-standing U.S. policy. He isn't particularly interested in toppling the regime of leader Kim Jong Un and isn't looking to force a reunification of the two Koreas, the person said. He instead wants to push for their long-term cooperation.

Trump's national security team had already thought through various scenarios that North Korea might take this weekend, and how the U.S. would react. So when the medium-range missile test failed right after launch early Sunday morning local time, Trump was informed immediately and decided to downplay it, according to the person.

It was Trump's decision that the administration's initial response would come from Defense Secretary James Mattis, who issued a 22-word statement Saturday night.

National Security Adviser General H.R. McMaster also used familiar language Sunday to describe North Korea's "provocative and destabilizing and threatening behavior," while leaving all options on the table as his team helps develop plans of action for the region.

In an interview Sunday on ABC's "This Week," McMaster said Trump had directed the National Security Council to collaborate with the Defense and State Departments, and intelligence agencies to "provide options and have them ready for him if this pattern of destabilizing behavior continues."

Hours after the failed test, McMaster emphasized Trump's preference, as with this month's airstrikes in Syria, for unannounced military action. He added that the North Korean leader's unpredictability complicated U.S. strategy.

McMaster, an Army lieutenant general, made the case for global action on the issue, including enlisting North Korean neighbor China, given the "brutality" of Kim's regime.

"This is someone who has demonstrated his brutality by murdering his own brother, by murdering others in his family, by imprisoning large numbers of people in horrible conditions for no reason, for political reasons," McMaster said. "So this regime has given the world reason for concern. And that includes -- that includes the Chinese people and the Chinese leadership as well."

While McMaster conceded that estimates on North Korea's weapons capabilities "vary widely," even failed missile tests can allow them to improve their programs, he said.

The U.S. and allies have been locked in long-standing hostility with North Korea, as the latter remains technically at war with its neighbor to the South since a truce to the Korean War more than 60 years ago. Successive U.S. presidents have struggled to contain three successive dictators, and to break a cycle that has been defined by sanctions, sanctions relief, and unsettling actions including missile tests and nuclear weapons development.

McMaster's use of "provocative" and "destabilizing" to describe North Korea echoes administrations of both parties that have attempted to rally others on the global stage, including China, to help prevent fresh war on the peninsula. Trump used the language in his February visit with Japanese Prime Minister Shinzo Abe.