In a speech to conservatives at a convention outside Washington, he also bashed opposition Democrats for failing to back his proposal for putting 1.8 million so-called "Dreamer" immigrants on a pathway to citizenship in exchange for tightening border security and severely restricting legal immigration. 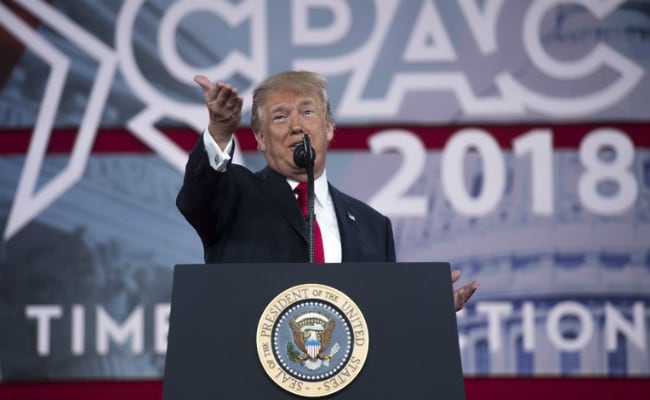 National Harbor, United States: US President Donald Trump on Friday recited the lyrics of a song seen as anti-immigration called "The Snake" to drive home his point about restricting immigration -- an inflammatory move that harkened back to his days on the campaign trail.

In a speech to conservatives at a convention outside Washington, he also bashed opposition Democrats for failing to back his proposal for putting 1.8 million so-called "Dreamer" immigrants on a pathway to citizenship in exchange for tightening border security and severely restricting legal immigration.

During his hour-long address, Trump pulled a piece of paper from his pocket and read "The Snake," a ballad by Al Wilson about a reptile who repays a "tender woman" that nurses it back to health with a deadly bite.

During his campaign, as well as in a speech early in his presidency, Trump used the song, based on one of Aesop's fables, as a less-than-subtle allegory about immigrants entering the United States.

On Friday, he made no secret about the comparison he was making.

"Think of it in terms of immigration," he urged attendees at the Conservative Political Action Conference (CPAC) as he launched into the song.

"You knew damn well I was a snake before you took me in," he said, reading the final line of the song, before returning to his speech.

"And that's what we're doing with our country, folks -- we're letting people in, and it's going to be a lot of people. It's only going to be worse."

Some mainstream Republicans have recoiled at Trump's continued recitation of the lyrics.

In his wide-ranging speech, Trump warned that efforts to reach a deal on the status of undocumented migrants brought to the US illegally as children could fail -- and blamed his opponents.

"The Democrats are being totally unresponsive. They don't want to do anything about DACA, I'm telling you," he said, referring to negotiations on Capitol Hill on replacing an expiring program that defers deportation for some undocumented migrants.

Former president Barack Obama launched the Deferred Action for Childhood Arrivals (DACA) program, whose recipients were given legal permission to work, live and go to school in the United States.

Last September, Trump announced he was rescinding DACA and called on Congress to craft a solution before March 5, setting off months of bipartisan negotiations.

The Senate held votes on several DACA-related bills last week, but none of them advanced.

Promoted
Listen to the latest songs, only on JioSaavn.com
Many conservatives in Congress including Senator Ted Cruz have been outspoken in their opposition to any legislation that provides "amnesty" to people who are in the United States illegally.

US Warns China Against Use Of Force At Sea