Trump Proud Of Freeing US Citizens Abroad. But An American In Russia...

Donald Trump has overseen the release of several American citizens who were held by North Korea and helped in complex negotiations that freed Americans held in Turkey, China, Venezuela and other countries. 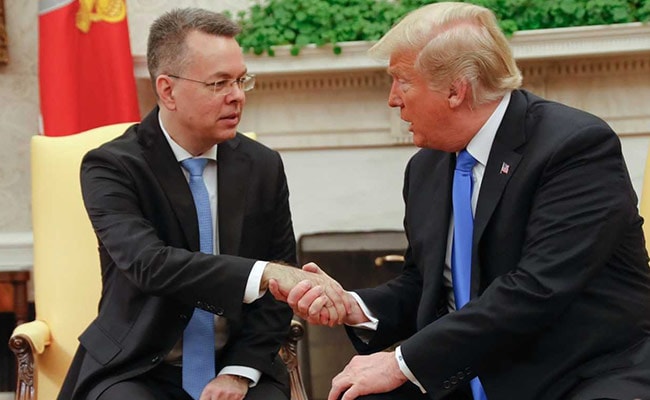 Donald Trump with Andrew Brunson, who was freed from Turkish prison in October, in the Oval Office.

There are few acts in which President Donald Trump takes as much visible pride as freeing U.S. citizens held by foreign nations.

Soon after taking office, Trump helped secure the release of Aya Hijazi, an Egyptian American charity worker who had been imprisoned in Cairo for three years. His administration has since overseen the release of several American citizens who were held by North Korea and helped in complex negotiations that freed Americans held in Turkey, China, Venezuela and other countries.

Trump has portrayed such rescues as a particular mission for his presidency. "We've had 17 [jailed Americans] released, and we're very proud of that record," Trump said in May 2018 after the release of Josh Holt, a U.S. citizen held in Venezuela for two years. "Very proud. And we have others coming."

Some former prisoners have praised Trump for taking a personal interest in their plight. "From the time you took office, we know that you've been engaged," said American pastor Andrew Brunson, who was freed from Turkish prison in October, to Trump when they met in the Oval Office.

But what will happen now that an American is being held by a nation with which Trump has a deeply ambiguous relationship?

Russia's domestic security service announced Monday that it detained an American citizen in Moscow on Dec. 28, under suspicion of espionage. The American is 48-year-old Paul Whelan, whose family has said he was merely visiting Russia for a wedding.

U.S. intelligence experts have expressed doubt that Whelan, who was discharged from the Marines for bad conduct and now works in corporate security, would have been involved in official U.S. espionage. Whelan's arrest came shortly after Maria Butina, a Russian gun-rights activist, pleaded guilty to conspiring to infiltrate U.S. conservative groups for the Kremlin.

"The Russians are saying we're pissed with the United States," said Bill Richardson, a former U.S. ambassador to the United Nations who has taken part in a number of hostage negotiations.

Richardson, who now leads a nonprofit prisoner-release group, said that Moscow was likely seeking a "quid pro quo" agreement; he said he is trying to arrange a meeting with the Russian ambassador to the United States in a bid to help Whelan.

Trump's reaction to the case will be scrutinized closely. Although his administration has been tough on what it sees as Moscow's acts of aggression and it has imposed sanctions of Russian officials, the American president himself has sought to maintain cordial relations with Vladimir Putin and has refrained from criticizing the Russian president.

Secretary of State Mike Pompeo said Wednesday that if Whelan's detention is found not appropriate, "we will demand his immediate return." A State Department official, speaking on condition of anonymity due to department guidelines, said that U.S. Ambassador to Russia Jon Huntsman had visited Whelan on Jan. 2 at a detention facility in Moscow. But Trump has yet to publicly mention Whelan's fate.

The State Department also has a special presidential envoy for hostage affairs, Robert O'Brien, who was appointed last May. O'Brien, a lawyer by training, had served in the same position during the Obama administration. A State Department official would not say whether O'Brien was helping with Whelan's detention, citing privacy concerns.

Earlier this year, O'Brien said that there were about 20 Americans being held unjustly around the world and called on both Russia and Iran to use their influence to help free one particular U.S. citizen: Austin Tice, an freelance journalist who was captured in Syria six years ago.

Richardson said that in Whelan's circumstances, Trump's personal involvement may in fact hurt the American's chances of getting released. Instead, he argued, negotiations should be kept low-profile.

"The president should stay thoroughly out of it," Richardson said, but "he probably won't. He can't resist."