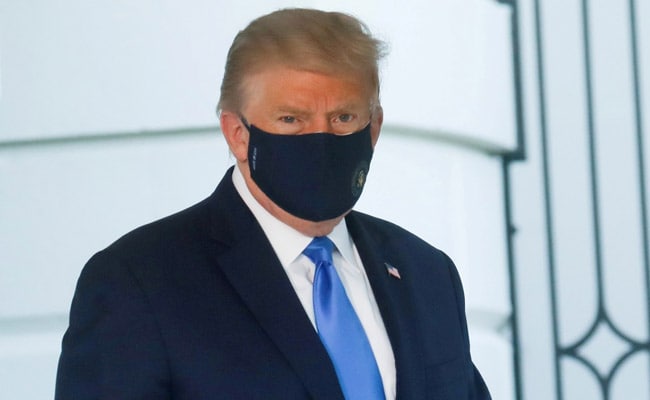 Donald Trump is no longer contagious, his physician said (File)

President Donald Trump is no longer contagious, nine days after being stopped in his tracks by Covid-19, his physician said in a statement released late Saturday.

"I am happy to report that in addition to the President meeting CDC criteria for the safe discontinuation of isolation, this morning's COVID PCR sample demonstrates, by currently recognized standards, he is no longer considered a transmission risk to others," Sean Conley said in the statement.

Conley, who has been accused of a lack of transparency with the public, said it had been 10 days since Trump first began showing symptoms of the new coronavirus.

Tests showed there was "no longer evidence of actively replicating virus," and that Trump's viral load was "decreasing," Conley continued -- though he did not state that the president is now virus-free.

Although it is probably the case that people with low levels of the virus are no longer contagious, a cutoff figure has not been established by the medical community.

Conley said Trump is fever-free and symptoms have "improved," adding that he would continue to monitor the president as he "returns to an active schedule."

The president was hospitalized on October 2, and stayed there for three days before returning to the White House.

Guidelines from the Centers for Disease Control and Prevention say that for people who had mild or moderate Covid-19, isolation and precautions can be discontinued 10 days after symptom onset, and once they have been fever-free for 24 hours.

For more severe cases, the guidelines say it is up to 20 days after symptom onset -- but the intensity of Trump's case has not been confirmed.

But top government scientist Anthony Fauci has said he had faith the president's medical team would not let him go out while still infectious.

"I can guarantee you that they will be testing him before they let him go out," he told CBS News.

Trump has been pushing to jump back on the campaign trail to revive his reelection bid.

He trails his Democratic challenger Joe Biden badly in the polls with less than a month before the election on November 3.