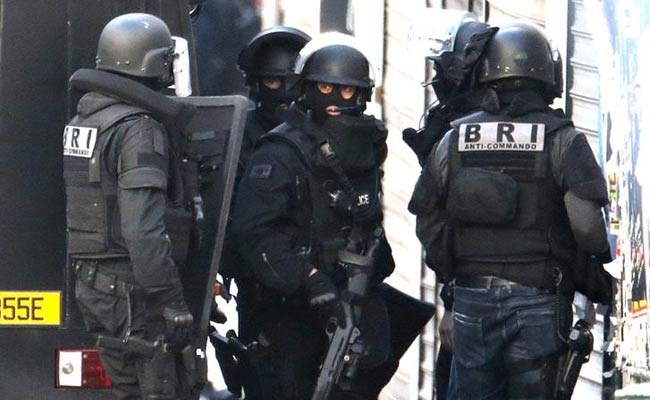 Members of French special police forces of Research and Intervention Brigade (BRI) arrive at the scene as shots are exchanged in Saint-Denis, near Paris, France, November 18, 2015. (Reuters)

Paris: French police launched a dawn raid on today as they hunted down those behind the terror attacks that claimed 129 lives in the French capital five days ago.

Around 04:20 am (0320 GMT): anti-terrorist police raid an apartment in Paris suburb Saint-Denis, home to the Stade de France stadium. Shooting breaks out.

04:31 am (0331 GMT): firemen say they have joined the operation against "an armed group holed up in an apartment". Police say between two and four people are inside.

07:56 am (0656 GMT): two suspected terrorist holed up in the apartment die during the police siege, including a woman who detonated an explosives vest, according to police sources. At least three police are injured in the operation.

09:17 am (0817 GMT): three men holed up inside the apartment are arrested, while a man and woman are arrested nearby, according to the prosecutor's office.

10:00 am (0900 GMT:) a government meeting at the Elysee Palace held as the operation continues.

11:26 am (1026 GMT): police say the assault is over and that seven have been arrested, of which three in the targeted apartment, two in neighbouring apartments and another two in the neighbourhood.