This Plastic Bag, An Artificial Womb, Could Some Day Save Extreme Preemies 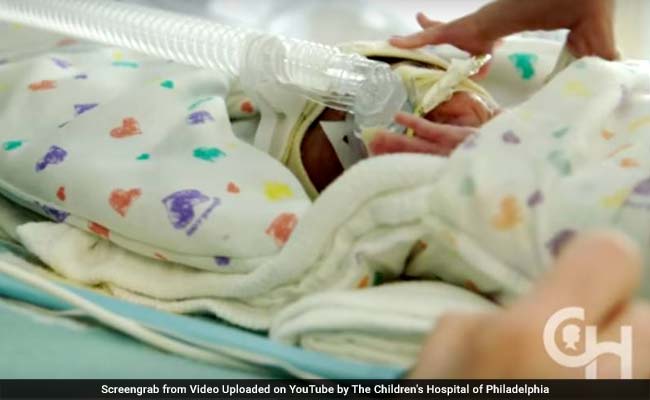 Premature births are responsible for half of the cerebral palsy cases in the US.

Each year in the United States, about 30,000 babies are born before gestating for 26 weeks, which is considered "critically preterm." The resulting health problems are vast. Half don't survive, and those who do face a 90 percent risk of lasting health problems.

Such premature births are responsible for one-third of infant deaths and half of the cerebral palsy cases in the country.

"The first health challenges the very preterm babies face is actually surviving," said Kevin Dysart, a neonatologist at the Children's Hospital of Philadelphia. "Among those that survive, the challenges are things we all take for granted, like walking, talking, seeing, hearing."

Emily Partridge, a researcher at the Children's Hospital of Philadelphia, said in a video: "Just looking at them, it is immediately clear that they shouldn't be here yet. They're not ready."

Modern medicine doesn't have a good handle on caring for such extreme preemies.

That could change in the coming decade. As outlined in a preclinical study published Tuesday in the journal Nature Communications, researchers at Children's Hospital of Philadelphia have made great strides in creating an artificial womb for critically preterm babies that could allow them to continue to develop naturally outside of their mothers' uteruses.

Currently, these babies - sometimes so small they fit comfortably in an adult human hand - are placed in incubators, where they are fed through tubes and delivered oxygen via ventilators.

The problem with this set-up, though, is they aren't ready for gestation to end. In the womb, their mothers delivered oxygen via blood through their umbilical cords. If they are out of the womb, a breath of air stunts lung development.

"These infants are desperate for solutions and for innovation," Partridge said. Desperately needed is a stopgap to help certain developments, such as lung development.

The team decided to focus on a new solution.

Rather than treat the preemies as though they were fully developed, ready to be in an open-air world, the team focused on creating the environment of a human womb. It's one in which the baby would be suspended in fluid and receive oxygen through its umbilical cord, rather than a breathing tube. This would allow gestation to continue for another month and potentially curb developmental problems.

"These infants have an urgent need for a bridge between the mother's womb and the outside world," said Alan Flake, a fetal surgeon and study leader. "If we can develop an extrauterine system to support growth and organ maturation for only a few weeks, we can dramatically improve outcomes for extremely premature babies."

They developed an artificial womb - essentially a polyethylene bag filled with artificial amniotic fluid - that the child would immediately be placed into after being removed from its mother via C-section.

They would be given a drug to prevent them from breathing while being transported from their mother to the device, which "allows the fetus to swallow and breath amniotic fluid, like it's supposed to during development," Flake said.

The artificial womb also includes a circulatory system to deliver oxygen to the baby. Two tubes are connected to the baby via its umbilical cord. One tube carries blood from the child into an oxygenator, where the blood is infused with oxygen. The second tube then carries the oxygenated blood to the child. The device is powered by baby's heartbeat.

Researchers successfully tested the device on eight lamb fetuses which were 105 to 115 days old, which is similar in development to a 23-week-old human fetus.

"Most of what know about human fetal development is from the lamb. All of the physiologic research over the past 50-60 years that have told us about fetal circulation, about developmental events, most of it has been from the lamb," Flake said.

The lambs developed naturally for another 4 weeks after being placed in the device, opening their eyes and growing wool.

The team hopes to soon begin testing on humans.

"We're in the process of interacting with the FDA, so it's not inconceivable that we could be talking about a clinical trial one to two years from now," Flake said.

When the researchers first conceived the artificial womb about three years ago, still thinking of it as "science fiction," they didn't yet have a grant - much less advanced equipment. The first few prototypes were built with "plumbing piping," purchased from Home Depot, eBay and beer stores.

Promoted
Listen to the latest songs, only on JioSaavn.com
"Sir Thomas Edison said, 'To be an inventor, all you need is an imagination and a pile of junk,'" Marcus Davey, a researcher at the hospital, said. "And essentially that is the story of this system."