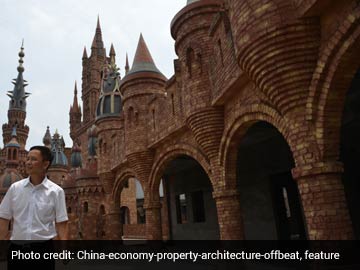 Chongqing, China: As the greatest urbanisation drive in history swells China's cities with ranks of identikit apartment blocks, one culinary businessman is indulging his architectural appetite with a visual feast of extravagant, outlandish castles.

"I don't have any hobbies, except for planting trees and building castles," said Liu Chonghua, standing on a crenellated turret atop the largest of the six he has constructed.

Liu, who made millions from feeding China's growing appetite for cakes and bread, now plans to make his home in the grey stone structure, which resembles Britain's Windsor Castle and towers above the surrounding rice fields.

His others include a red-brick fairy-tale edifice stacked with soaring spires, which seems to have emerged from Disney's version of Aladdin, and a white confection with candy-coloured towers reminiscent of Neuschwanstein, the hilltop fantasy built by Bavaria's 19th century 'Mad' King Ludwig II.

"When I was a child I heard stories about princes and castles," said Liu, 59, adding that he grew up "with an empty stomach every day" in China's countryside and was sent to dig ditches during the political upheavals of the 1960s.
After making his fortune, he said, "I wanted to turn the castles of my dreams into something real."

Liu is one of several Chinese millionaires channelling their wealth into eccentric projects, but his designs have led to death threats and put him on a collision course with local officials in the southwestern megacity of Chongqing.

His designs were stimulated by buildings in Munich and the chateaux of France's Loire Valley, he said, citing maverick Spanish architect Antoni Gaudi, designer of Barcelona's Sagrada Familia cathedral, as an inspiration.

One of his construction workers, former soldier Ma Wenneng, tinkered with a fountain on a balcony and dismissed the challenges of recreating foreign designs on Chinese soil.

"Actually, European castles are really easy to build," he said. "The boss has a book of castle pictures in his office and we use that as a reference."

China's building boom is unprecedented in human history, with the country's urban population growing by an average of over 20 million people a year for more than a decade -- resulting in hectares of utilitarian, cookie-cutter developments.

Urbanisation has raised living standards for millions, but Liu says he is taking a stand against miles of identical apartments.

"China needs castles, because it needs a more pluralistic culture, he said. "A city needs people who have dreams, to help society develop."

Liu is not the only person chafing at China's homogenous urban environment. The then vice minister of construction Qiu Baoxing complained in 2007 of "a thousand cities having the same appearance".

Tom Miller, an expert on China's urbanisation, said: "If you were parachuted in blind to almost any Chinese city, and you were looking around, you would have the same uniform buildings.

"When you are building at that kind of enormous speed, you don't worry about aesthetic niceties," he added.

"People are realising that it's not good for everything to look identical, and are realising tourists will pay to see something different," Miller said.

Liu says he spent more than 100 million yuan ($16 million), some borrowed from friends, on the buildings, which are free to visit.

"I think the castles are very romantic," said a woman surnamed Gao, posing for pictures in a white wedding dress outside a castle beside the headquarters of Liu's firm, which manufactures pastries, biscuits and a product described as a "dreamlike cake."

Some local officials feel differently, and two years ago they brought a section of Liu's dream crashing down, sending diggers to knock over a 16 metre high castle gate. "That was my lowest moment," he said.

"The government has never appreciated me, they said I've offended local officials," he complained, adding: "I got anonymous calls from someone threatening to run me over with a car."

Other newly-minted Chinese magnates have also engaged in bizarre construction projects -- one businessman has built imitations of both the Great Pyramid of Giza and the palace of Versailles on his corporate campus -- but Liu has ambitions for more.

Promoted
Listen to the latest songs, only on JioSaavn.com
"I have achieved half of my dream," he said. "The next part is building better and more awesome castles, the kind that will astound people."

Staring wistfully into the distance, he pointed towards a forested mound. "I will build another, bigger castle on top of that hill," he said.