They Banished Their 15-Year-Old For Having Her Period. She Died In A Cold Nepali Hut. 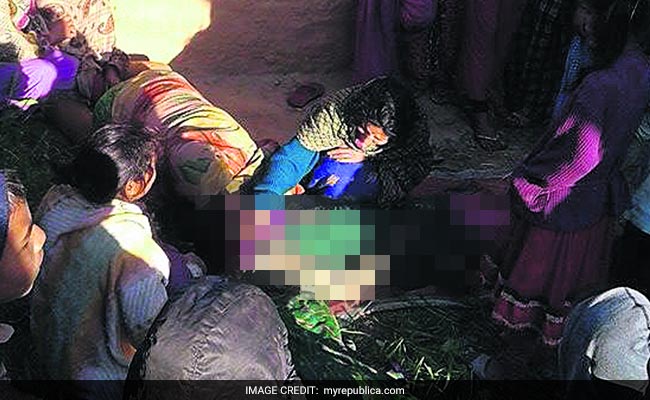 Roshani Tiruwa is mourned outside the hut to which she was banished.

A 15-year-old Nepali girl died over the weekend in a hut to which she had been banished for menstruating - the latest victim of an ancient ritual that persists in parts of south Asia.

Roshani Tiruwa's father told Republica, a Nepali outlet, that he found her dead on the floor of the hut Sunday morning after she was forced to spend the night there alone.

Police told local reporters that the ninth-grade student most likely suffocated after lighting a fire in the hut to keep warm.

Prime Minister Pushpa Kamal Dahal called for an end to the custom known as Chaupadi a month earlier, after a 21-year-old woman in a nearby village died the same way.

But with centuries-old roots in Hinduism, Chaupadi has survived in some regions despite bans, a U.N. alert and the deaths of many women.

Nepal outlawed it in 2005, yet a 2011 bulletin from the United Nations said that nearly every woman in Roshani's district of Achaam still lived under the practice.

The Guardian interviewed a 16-year-old girl in a neighboring district who was sent each month to live in a stone shed "littered with hay, muck, insects and dung."

"The cow dung smells and the animals step on us," the girl told the paper in April.

"We don't want to live like this but our gods won't tolerate it any other way," another woman from the village said.

The New York Times reported that girls "deemed impure and untouchable" while menstruating are sent from their homes to stay in sheds or caves, and forced to wash at separate taps.

"Communities believe that to break the tradition would bring devastating bad luck: crops would fail, animals would die, snakes would fall from the ceiling," the Times reported. "The imagined consequences are so dire that few dare to test stopping."

But many who obey Chaupadi find death themselves. An 11-year-old from western Nepal died of an illness in 2010 because "her family and neighbors refused to take her to a hospital, believing they would become impure if they touched the menstruating girl," according to the U.N. bulletin.

"One woman's daughter burned to death from a fire she lit to keep warm," NPR reported in 2013. "Another lost two babies who slept with her at night: one was bitten by a snake; the other was taken by a jackal."

From a village in central India last year, the Guardian profiled the plight of women exiled during their periods to "a thatched hut on the edge of a forest."

And while most women survive their isolation, the ignorance and stigmatization can still harm them.

The Times of India reported on a 2011 survey that found barely 1 in 10 women in the country used sanitary pads during their periods, while others used alternatives such as ashes and sand.

Promoted
Listen to the latest songs, only on JioSaavn.com
The same survey found that nearly 1 in 4 Indian women dropped out of school after they began to menstruate.