The Worst Sex In The World Is Anglerfish Sex, And Now There's Finally Video

Unlike the mantis, Mr Anglerfish does not die as Ms Anglerfish subsumes him into her body. His skin becomes her skin 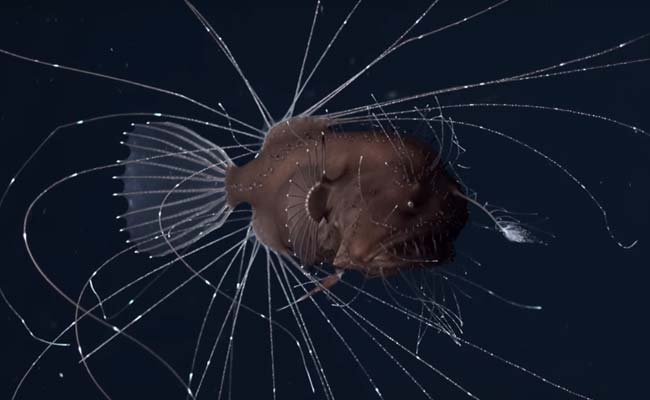 Deep-sea anglerfish sex is an endless horror. Every. Single. Time.

Praying mantis sex gets a bad rap because sometimes the female bites off the male's head and eats him. Like, once in a while. Usually it goes perfectly fine for both mantises, but everyone fixates on the bad dates.

Deep-sea anglerfish sex, on the other hand, is an endless horror. Every. Single. Time.

A male anglerfish's first and only sexual adventure results in him becoming permanently fused - by his lips, no less - to the side of a relatively gargantuan female that resembles David Cronenberg's nightmare about the shark from "Jaws."

Unlike the mantis, Mr. Anglerfish does not die as Ms. Anglerfish subsumes him into her body. His skin becomes her skin. His major organs dissolve, his fins fall off and his blood becomes her blood, until not much more is left of him but a living set of testes to make sperm at her demand.

Then he dangles off her like that for the rest of his life, even if she goes on to merge with other anglerfish, wearing her sex partners like Mardi Gras beads.

For as long as anglerfish have been having body-meld sex - a bizarre but efficient way of reproducing in the sparsely populated ocean depths - it's been a relatively private affair. We of dry earth and independent genitals know of the phenomenon mainly through dead specimens caught in nets and illustrations.

Until Thursday, that is, when Science published what it says is the first video of wild anglerfish engaged in their eternal hell of coitus.

Somewhat appropriately, a pair of married deep-sea explorers took the video in 2016, from a submersible about half a mile underwater near the Azores islands in the North Atlantic Ocean.

Kirsten and Joachim Jakobsen were about to call it a day and surface Science wrote, when they spotted a female fanfin angler about the size of a fist. They noticed a weird little appendage on her belly, which of course was actually a male fanfin angler that will never be whole or independent again.

The Jakobsens recorded the pair for about half an hour, Science wrote. They did not see the female release an egg, which the male only exists now to fertilize. Nor did they witness Mr. Anglerfish's "fins and other disused body parts wither away until the male is only what the female needs him to be," which National Geographic assures us will eventually happen.

But they took a rare high-quality video of the elusive creatures, which showed off the female's dazzling mane of long whiskered filaments and the bioluminescent lure, as well as her dead eyes and gaping mouth full of monster teeth.

The biologists were thrilled to see video of this rare form of reproduction, Science wrote - rather than, say, distraught at the philosophical implications of what they were seeing.

An ecologist at the Monterey Bay Aquarium Research Institute "was impressed with how flexible the male was despite its solid attachment," Science wrote, "seemingly moving around in any direction he wished."

Promoted
Listen to the latest songs, only on JioSaavn.com
The ecologist was apparently confident that Mr. Anglerfish had no wish to stop dissolving into the creature that took his body, his will and his very identity, not to mention his virginity.

(This story has not been edited by NDTV staff and is auto-generated from a syndicated feed.)
Comments
AnglerfishPraying mantis