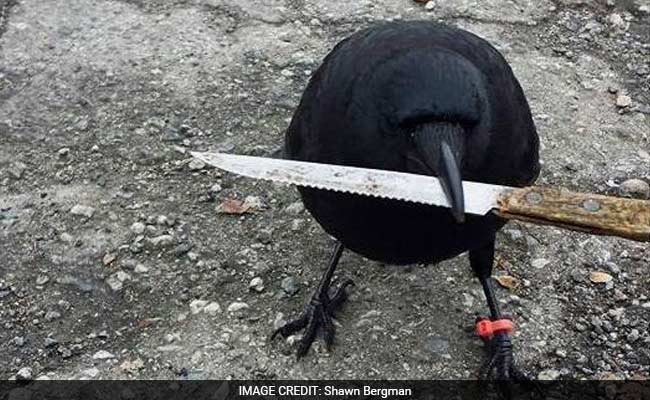 Canuck the crow, pictured in January with a knife. The crow picked up a different knife at a tense crime scene this week.

A very strange crime scene played out in Vancouver, B.C., last week. It involved more than 20 police officers, a man accused of wielding a knife, and a crow seen stealing the knife.

According to local media reports, police responded Tuesday afternoon to a car that was on fire in a McDonald's parking lot on the city's east side. Once there, a police statement said, a man confronted officers with a knife, and they shot him. He was treated for gunshot and knife wounds that were not life-threatening, according to the Vancouver Courier.

So there was no murder, and there was no murder of crows. But there was one crow, and witnesses said it swooped down, used its claws to pick up the knife and then flew away. One of the officers on the scene "was forced to chase down" the bird, which dropped the knife a few feet later and also "tried to make off with a pair of eyeglasses in the lot and steal gear belonging to a television camera operator," Courier reporter Mike Howell wrote.

Was this bird a crow-conspirator, trying to remove incriminating evidence?

Nope. A red plastic band around its left leg quickly identified it as east Vancouver's most famous crow, Canuck. The bird has a Facebook page devoted to him that had more than 22,000 followers as of Saturday afternoon, as well as starring roles in a few YouTube videos. The man who runs the Canuck and I Facebook page, Shawn Bergman, said the bird fell out of its nest as a chick and was rescued and rehabilitated by his landlord's son (Bergman lives in the basement). That was in May 2015.

Two months later, Bergman said, Canuck was released into the urban wild. But "for some reason," Bergman said, "he just imprinted me as a best friend." (Everyone refers to Canuck as a he, though the bird's gender is not known; Bergman said he is going to send feathers to a DNA lab to settle the matter.)

Before his cameo at the crime scene, the corvid had become known for attacking a cyclist, riding the train, communing inside cars with people, attending horse races and helping in gardens. "But he seems to also have developed a bit of a darker streak," a CBC reporter intoned in a television report last week. "He's been known to steal keys, and so on."

The key theft and knife-lifting came as little surprise to Kevin J. McGowan, a crow expert at the Cornell Lab of Ornithology in Ithaca, New York, - and not because they're shiny objects. McGowan said crows' purported interest in shimmering things is "folklore." But when they're young, he said, crows are often very interested in objects that they can pick up, manipulate, take apart and use in games with their siblings, he said. That's even more true for hand-raised crows, which see up close that people possess and frequently use a lot of objects.

So Canuck might have seen the knife as the start of a fun game with a police officer and thought, "I'm going to grab that and steal it and maybe he'll try to catch me," McGowan said.

Many scientists think crows are among the smartest of animals, and they've been shown to be able to recognize individual human faces. McGowan said they're also keen observers and judges of individuals, seeing them as a "danger or a potential boon," and perhaps a source of play or even humor. Canuck's exploits are probably a sign of that, he said. "They're not mature until they're 2, and I mean that behaviorally," McGowan said. "If he's still a kid, that explains some of this stuff."

Bergman said he named the crow Canuck, with the approval of the landlord's son, because he wanted an "ultra-Canadian" moniker "that all Canadians could get behind. I'm proud of my country and always have been."

He said he sees Canuck almost every day. The bird accompanies him most mornings to Tim Hortons, a Canadian fast-food chain, and then follows him home again. When Bergman goes to work, Canuck follows him to the bus stop.

"I'm his best buddy, so no matter who he's with or what he's doing, he'll pretty much drop everything to come see me," Bergman said.

(This story has not been edited by NDTV staff and is auto-generated from a syndicated feed.)
Comments
VancouverCrow with knife